"Juno will peer hundreds of miles downward into the atmosphere with its microwave radiometer, which passively senses heat coming from within the planet. This capability will enable Juno to reveal the deep structure of the Great Red Spot, along with other prominent Jovian features, such as the colorful cloud bands." -Tricia Talbert

Jupiter’s Great Red Spot is one of the enduring mysteries and wonders of our Solar System. The spot was first identified back in 1665, was unseen for over 100 years between 1713 and 1830, and has been continuously observed ever since. The hurricane-like winds exceed 600 km/hr, making it the oldest, largest, and fastest storm to rage in the Solar System over any appreciable timescales. 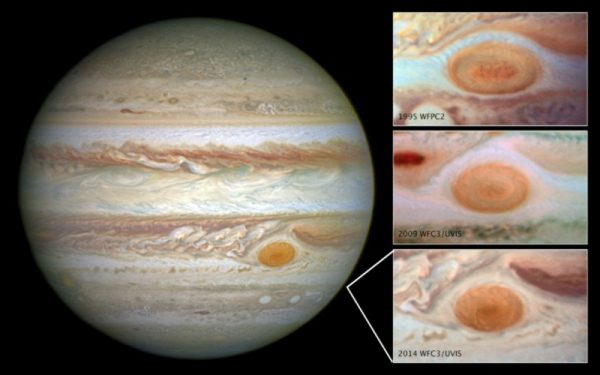 Images from the Hubble Space Telescope show the Great Red Spot shrinking in extent and changing in shape even from 1995 (top) to 2009 (middle) to 2014 (bottom). Image credit: NASA, ESA, and A. Simon (Goddard Space Flight Center).

But mysteries remain, including why it’s so sustained, why it’s been shrinking for the past 40 years, and even why it’s red in nature. Equipped with 8 independent instruments designed to measure Jupiter’s atmosphere in a variety of ways, the Juno mission makes its closest approach to the Great Red Spot today, where it will come within less than 10,000 km of it. During this time, it will image it in greater detail than ever before, using all of its instrument as well as its imager. 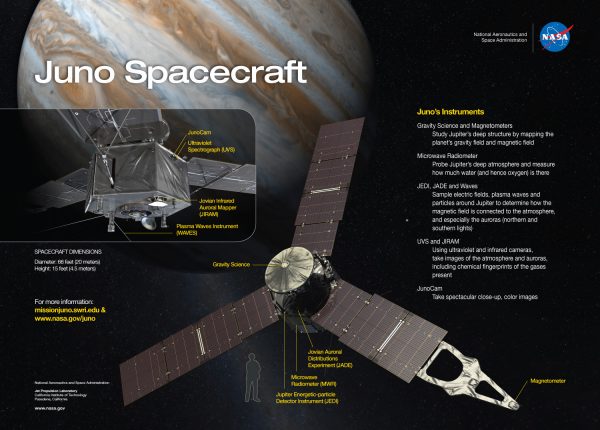 Juno's mission details are highlighted by eight independent instruments all capable of analyzing its atmospheric properties in a variety of ways, along with its high-resolution imager, Junocam. Image credit: NASA / JPL-Caltech.

What will it find out? Come take the tour as to why it matters for today’s Mostly Mute Monday!

Very cool. How long is required for the data to arrive back here?

@dean,
That would depend entirely on where Earth and Jupitier are in their orbits at the time of transmission and reception. The length of time change considerably depending on if both planets are even on the same side of the solar system at the time as the distance between Earth and Jupiter is always changing in relation to each other as they orbit the sun at different rates.

There may an additional delay while the data is processed at NASA's JPL. https://www.jpl.nasa.gov/