Beyond Black Holes: Could LIGO Have Detected Merging Neutron Stars For The First Time? (Synopsis)

"Presently thought to be the most powerful explosions in nature... their sources have only recently been localized by observations of associated afterglows in X-rays, visible light, and radio waves, delayed in that order." -Richard Matzner, on the dictionary entry for Gamma Ray Burst

It seems like an eternity ago, but it’s been under two years since LIGO first began the science run that would first detect merging black holes. Their latest scientific data run is scheduled to end in just two days, and thus far, they’ve announced a total of three black hole-black hole merger discoveries, along with a fourth probable candidate. Yet thanks to the Twitter account of renowned astrophysicist J. Craig Wheeler, a bit of information has leaked: LIGO may have discovered merging neutron stars for the first time. 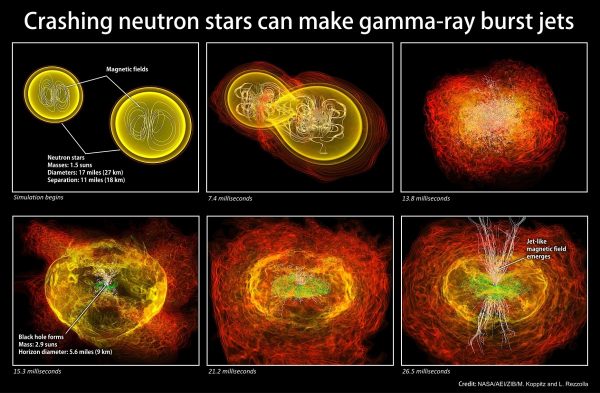 When two neutron stars merge, as simulated here, they should create gamma-ray burst jets, as well as other electromagnetic phenomena that, if close enough to Earth, might be visible with some of our greatest observatories. Image credit: NASA / Albert Einstein Institute / Zuse Institute Berlin / M. Koppitz and L. Rezzolla.

They’d be approximately ten times lighter than the black holes we’ve witnessed merging, which means the signals are only 10% as strong. In order to get the same amplitude, they’d need to be only 10% as distant, cutting the search volume down to 0.1% the volume. But still, neutron stars may be much more abundant, so we might have a chance. Just yesterday, Hubble observed a galaxy with a binary neutron star inside, just 130 million light years away. 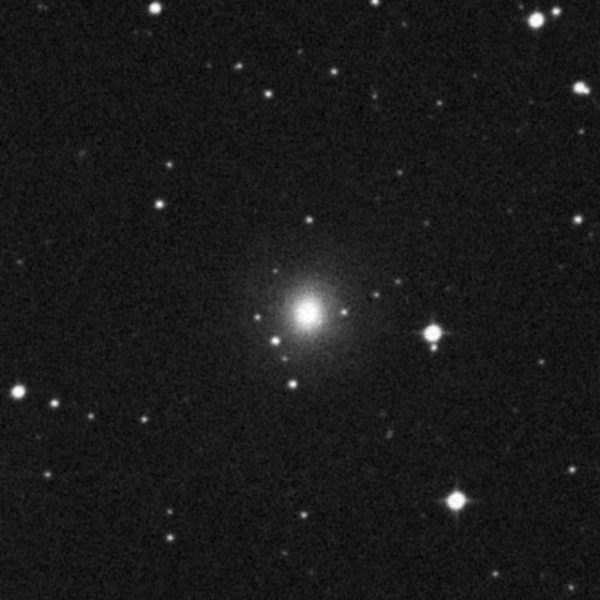 Could we have just detected a merging neutron star pair for the first time, in both gravitational waves and electromagnetic radiation, together? The rush is on to find out!

@Ethan,
Stop playing the mindless cheerleader for a moment.
Unless they have resolved their not so little signal to noise problem, the LIGO team did NOT actually discover orbiting black holes two years ago, being in that said signal was inseparable from their own processing noise, they admitted it as much only after someone else caught them, that effectively means they just detected noise. They still haven't found anything external to their own software processing and filtering, as they would have made a very quick claim for such confirmation had it allowed them to locate and confirm the source. First there must be independent confirmation of the so called orbiting/merging objects by some other means of detection, not just a replay of the same computer generated assumptions, then analysis of the purported signal can have some baseline of comparison to determine its significance. Until there is some other form of confirmation for said celestial objects even existing at all in a specified location, a very questionable computer generated wiggle doesn't mean much more than an incredibly expensive 'trust us because we said so'.
..
Carrying on with claims of new discoveries as if LIGOs previous claims were not already in question for these very same reasons also isn't very honest reporting. Would you like to update how the investigation into their earlier claimed results is going?

^^^^^^ Perhaps the LIGO team is eagerly awaiting the arrival of your obvious and clear expertise to set them, and the world, straight.

Alan G,
Can the snark and lets cut to the chase.
Their original signal they claimed was a discovery is being contested, no? Last I heard, there was a lot a shuffling of feet (of the 1000+ authors) and awkward throat clearing going on with a final 'we need further testing...' quietly being muttered.
If you know how their 'further testing' turned out, please feel to enlighten everyone. Maybe you can find another link to a follow up puff piece about how the LIGO scientists 'feel' to be following in the footsteps of BICEP2.
.
No one else has been able to locate their alleged orbiting black holes by any other means of observation, no? So, no much needed verification either. Also strange was the idea that the orbiting black holes supposedly generating 'gravity waves' would not be repetitive, like a pulsar, as they are spiraling around each other, there wouldn't be just one wave, but many rippling outward if Ethan's fake space time diagrams are to be considered as any kind of representation of the waves spiraling outward.
.

Looks like the link to the Hubble Telescope image is now showing something else.

A factor ten reduction in energy means that the event needs to be a factor ten closer to be detected?
Ehhh? This does not seem obvious to me.

@Klavs Hansen #6: The amplitude of the noise in the detectors (LIGO, VIRGO) is independent of the source signal. In order to reliably detect a signal, it has to have an amplitude higher (by some factor, like 3 or 5 or whatever) than the noise.

For gravitational waves, the amplitude falls of linearly with distance -- this is different from light, for example, and is probably the non-obvious part.

I certainly don't know all the answers on the question, but when I put that article up against your overly-dramatic postings, at face value, one is far more credible than the other. Hint: it isn't you.

It should be noted that "credible" doesn't need to mean "correct in every way". They can be wrong in a variety of ways on the details and still have more credibility. Because that's what happens when you engage in trolling.

Michael Kelsey #7
'the amplitude falls of linearly with distance'
Yes, but the amplitude also varies with the square root of the event energy, not linearly with the energy.
At least if we use the word amplitude in the same sense as for light. This is based on energy conservation, so it seems difficult to avoid.
Why would gravitational waves be different from light in this respect? Massless particles propagating in vacuum, etc.

Here's another interesting bit of information. Looks like the Chandra Space Telescope was also pointed on Aug. 19 in the direction of NGC 4993, at a target SGRB170817A:

It has a science category of 'BH AND NS BINARIES' and was triggered:

Gravitational wave source detected by aLIGO, VIRGO, or both. Single EM counterpart identified by Dark Energy Camera for Chandra follow-up at a distance of <~400 Mpc. Activation will be requested within 10-15 days of gravitational wave detection.

@Alan G. #7,
I actually think you're the one that's funny. I'm overly dramatic? On this site? The same site where your cosplaying host appears dressed up like a Little Mermaid Disney character in the byline? Riiiiight.
.
Alan, you don't know the answers to any of the questions I asked because neither apparently does any of 1000+ scientists on he LIGO team. If you were in the least bit curious, this should have set off your bullshit detector or raised a red flag, and maybe triggered a sense of uneasiness in you as happy talk narratives fell apart, much like when the same pattern of events happened to the BICEP2 team, after all the PR hype played out, nothing at all was left of their discovery, much less their vaunted credibility you value so highly. To add insult to injury, the slowly deflating Higgs discovery is not faring much better.
.
Here's a quote from another one of those crusty old scientists dean doesn't think highly of and who Ethan probably should :
.
"I would like to add something that's not essential to the science, but something I kind of believe, which is that you should not fool the laymen when you're talking as a scientist. . . . I'm talking about a specific, extra type of integrity that is not lying, but bending over backwards to show how you're maybe wrong, [an integrity] that you ought to have when acting as a scientist. And this is our responsibility as scientists, certainly to other scientists, and I think to laymen"
-Richard P. Feynman Caltech 1974