Afraid of aliens? The science doesn't back you up (Synopsis)

“Man has gone out to explore other worlds and other civilizations without having explored his own labyrinth of dark passages and secret chambers, and without finding what lies behind doorways that he himself has sealed.” -Stanisław Lem

One of the questions that’s fascinated humanity since we first began looking up at the night sky is whether or not we’re alone in the Universe. Although we now know of other stars, other planets, and potentially inhabited worlds, we have yet to make contact with another intelligent species. Despite our curiosity, a great many people live in fear that if we did begin communicating with extraterrestrials, it would serve only to announce our presence to a potentially hostile (and more advanced) civilization. 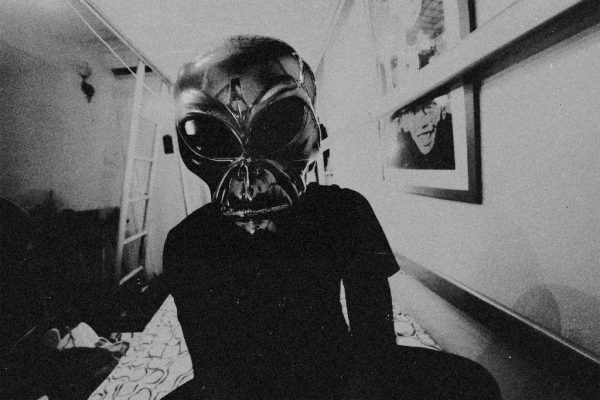 Our fear of aliens, and their potential hostility towards humanity, has driven much of our public sentiment and presentation of extraterrestrial life. Image credit: plaits / flickr.

No one wants humanity wiped out, of course, but no one wants to bury our heads in the sand and to cease the search for one of the ultimate truths about our Universe. If you take a detailed, logical look at the problem, three possibilities for aliens emerge: they’re uninterested in us, they’re interested and benign, or they’re interested and malevolent. But even if they’re malevolent, they likely pose no danger to us, which you only learn if you put your fears aside and view the situation rationally. 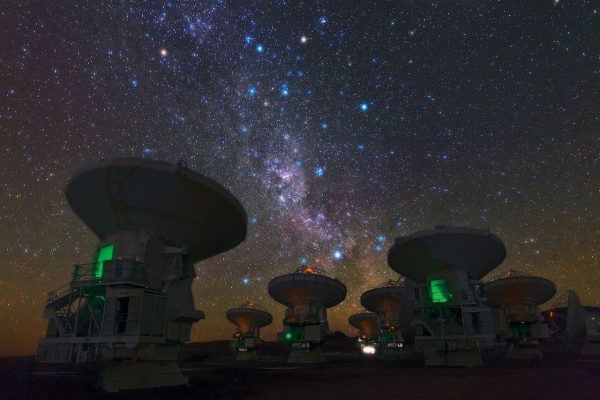 The southern Milky Way as viewed above ALMA is illustrative of one way we search for signals of intelligent aliens: through the radio band. If we found a signal, or if we transmitted a signal that was then found and responded to, it would be one of the greatest achievements in our planet's history. Image credit: ESO/B. Tafreshi/TWAN (twanight.org).

There’s so much to potentially gain and so little to use, yet some of our greatest minds succumb to fear on this topic. Come take a look for yourself and see what you think!

I've always felt that way. But, our SF entertainment thrives off stories of hostile aliens. And that has preconditioned our minds,
so your position has to overcome hurricane headwinds.

Most amusing is aliens coming here to satisfy their palettes "How to Serve Man". Of course if you think about the logistics problem, versus any possible food value, the proposition is absurd.

So many mineral resources to be found on uninhabited space rocks, no need to strip the few inhabitable worlds.... And again logistics....

The first possibility [no interest] seems the most unlikely.

I disagree, in fact I think it's the most likely. Consider the species on Earth with reasonably sized brains. most of them can communicate (albeit not like we do). All of them are more closely related to humans in brain structure, instinct, and emotional desires than any alien we will ever meet - hands down, no contest. And yet practically none of them show any interest in wanting to communicate with humans. The only ones who really do so are the ones we've domesticated or raised/forced to be around us. IOW, the only ones with interest in humans are the ones humans have spent a great amount of time and effort with to get them interested in us.

Look, if chimps in the wild aren't setting out to explore and communicate with humans, neither are aliens. Because the chimps are going to be much more similar to us in motivation than any alien.

What other reason is there to actually be a spacefaring species, if you're not interested in contacting whatever other species might be out there?

Survival. Propagation of their descendants. Impress potential mates (if the last one seems farfetched, consider the bower bird). None of these things require a desire to communicate with other species. None of them even require a species to have any instinct or emotion like 'curiosity.'

"Yet there's no evidence at all that there's any malevolence to aliens."

There is also no evidence at all that they are benevolent. Going with caution in sight of unknown is IMO prudent, not paranoid. This isn't to say that I'm voting for not trying to search for intelligent life, even contact. But I see no logical reason or evidence that they "ought" be kind, loving teachers of "lesser" evolved species. It is a noble though. But isn't that just personal wishes?

On the other hand, you neglected one IMO important thing from your list of what they might be looking for. A place to colonize. Isn't that what we are looking for?

Let's put benevolence and malevolence aside for a moment, since, I would argue, aliens who teach us new tech and how to be better humans, is just as much a sci-fi fairy tale as the other side. How about more or less indifferent. Not bad tempered, slave owning. Just indifferent. And let's say they are looking for a place to colonize. They received a signal and realized that the gap between them and us is as much as between us and neanderthals. We are a curiosity to them. They come, without any intention to conquer and see a planet of monkeys. They need a place for their own species. The best case scenario is they go "oh, this place is way overcrowded, let's try somewhere else", a slightly less good is we become a zoo for some other species to admire. This view has some comedy to it, i admit. But what I'm trying to convey is that IMO, going with "they will be kind teachers from above" relies on one very specific line of evolution (both biological and social) for those aliens to have. In physics terms, this would be a case of very fine tuning. Like you wrote in the beginning, there is no evidence for it. In fact, looking at the life on earth (not only human), all the evidence points against it. All species on earth are governed by several basic instincts: feed, reproduce, thrive. Altruism towards other species or even giving any consideration to them is almost non-existent. And not talking about predators and prey. Does a zebra care if it stomps a rabbits burrow? Nope. Is zebra hostile towards rabbits? Nope. Does zebra care about educating rabbits not to make burrows in a place where it might get stomped? Nope.

Ethan fails to learn from human history, or the cautionary lessons of his own Star Trek canon. In Star Trek the incredibly logical Vulcans were by no means in agreement that contacting humanity was such a good idea (many thought it was outright stupid/illogical, and still hold this opinion), and shortly thereafter the Vulcans acknowledged that they had barely survived their own violent warring periods of history and actually been responsible for the extinction of a few sentient species when they had played 'benevolent alien Santa Claus' with helpful technology...without even intending a drop of harm, 'ooops' happened in significant quantities. Said species then used this technology to thoroughly annihilate themselves with it. Ethan's very position on alien contact was outlawed by the Federation on pain of death, They called it the Prime Directive.
.
The Federation's Prime Directive was specifically created to prevent ego tripping scientists from traipsing about while handing out technology gifts to lesser developed species, and disrupting their natural development or causing their outright extinction. Despite this noble plot device, Kirk and company broke this directive whenever dramatically convenient, sometimes with the hilarious results of unintended consequences "A Piece of the Action", or very tragically and painfully as in one of the finest ST stories ever told "The City on the Edge of Forever".
.

While positioning itself as reasonable, Ethan's position on alien contact favors uninformed speculation about alien motives and ignores the side of the equation we know anything at all about:
Us. Humanity.
What would we do?
This is an oversight so large I have a hard time believing it to be unintentional.
What would WE do to the aliens if they weren't prepared for our aggressiveness?
Realistically, as opposed to wistfully, What would WE do with newly acquired technology thousands of years beyond our own, just moments after we acquired it? Use it responsibly or attempt world peace through dimensional disintegration? Knowing something about human nature, I'd sooner take my chances and hand a three year old a flamethrower to play with before gifting a present day human with advanced alien technology.

How to serve humans? Saute the liver, steam some fava beans, and drink it all down with a nice bottle of Chianti.