When the Advanced LIGO detectors turned on in 2015, it shook up the world when they detected their first event: the merger of two quite massive black holes. Since that time, they’ve observed black hole-black hole mergers multiple times, with the VIRGO detector in Italy joining them for the fourth event. But this wasn’t what LIGO/VIRGO expected to see; rather, they were built to hunt for merging neutron stars that were much closer by. 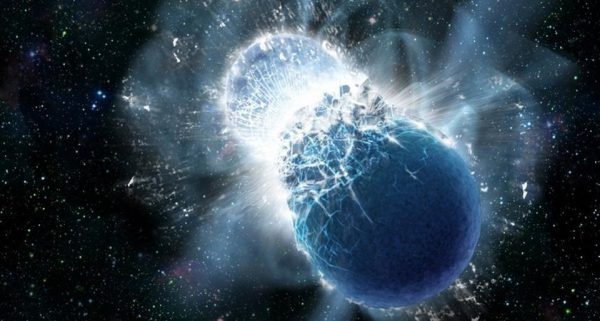 Two merging neutron stars, as illustrated here, do spiral in and emit gravitational waves, but are much more difficult to detect than black holes. Hence, they can only be seen if they're close by. However, unlike black holes, they should eject a fraction of their mass back into the Universe, where it composes most of the heaviest elements we know of, and emits an electromagnetic counterpart. Image credit: Dana Berry / Skyworks Digital, Inc..

Neutron star mergers would be superior to black hole mergers in an extraordinary way: it would enable other astronomers to get in on the action. Unlike black holes, merging neutron stars should emit radiation across the electromagnetic spectrum, from gamma-rays to UV/optical afterglows. On August 17th, LIGO and VIRGO saw their very first neutron star merger, pinpointing its location to galaxy NGC 4993, just 120 million light years away. 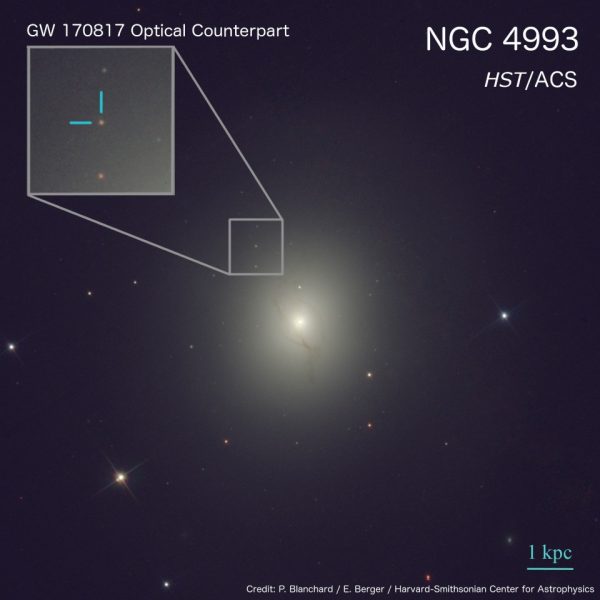 As soon as the location had been pinpointed, many of Earth's greatest observatories, including the space-based Hubble, turned towards NGC 4993 to observe it. The telltale sign of a neutron star-neutron star merger, shown above, represented the first cross-correlation between the gravitational wave and electromagnetic sky. Image credit: P.K. Blanchard / E. Berger / Harvard-CfA / HST.

For the first time, we’ve joined the gravitational wave and light-based skies together with an incredible event. It’s a glorious step forward. And it’s just the beginning.

When two neutron stars have been circling each other for 11 billion years, what is the relative velocity of their "collision" when they do collide? Is their collision more kinetic or quantum in nature?

And the PR machinery keeps on rolling on …

So a week before the Nobel prize they make the announcement; then there's the prize; and now a week later we get to see these 'Rosetta' results, from an event that happend almost exactly 2 months ago.

Anyway it looks fine, but what are the chances of seeing a flash within such a giant region on a particular day?

An other thing I found odd was in a video they showed;
http://content.jwplatform.com/previews/2ZE9NAox-coeAxn20
That the scientists apparently hadn't seen a signal like this before, this seems a bit weird, in it.

Thank you for educating people about technology on Coast to Coast last night and in your book. You stated last night that you were concerned about a technology that can implant memories, and effect the body, including the loss of sight. Please tell me what kind of technology that is, so that I can research it further.

Incredible.
So what is the expected frequency of these events, or rather of these events being close enough to observe the gravitational waves as well as the electromagnetic output? I'm betting the astronomers are thanking their lucky stars that we were so fortunate.

So some questions, for those who don't have the time, understanding and/or access to the papers.
(1) What is the estimate of the NS masses?
(2) How did they come up with the age of the NS system?
(3) What is the estimated rate of mergers per cube a billion light years on a side?
(4) If both NS are near the minimum mass of a NS, can we get a NS rather than BH.
(5) Do we expect of significant gamma-ray burst from a BH NS merger?

@Omega Centauri #5: None of the LIGO papers or press releases are behind paywalls. They are all open access. Some of the 70+ optical counterpart papers may be behind paywalls; I haven't plowed through them yet.

Why don't you start with the Wikipedia article? https://en.wikipedia.org/wiki/GW170817 The links therein will be to non-paywalled writeups.

If you want justifications for any of those answers, go read the non-paywalled papers.