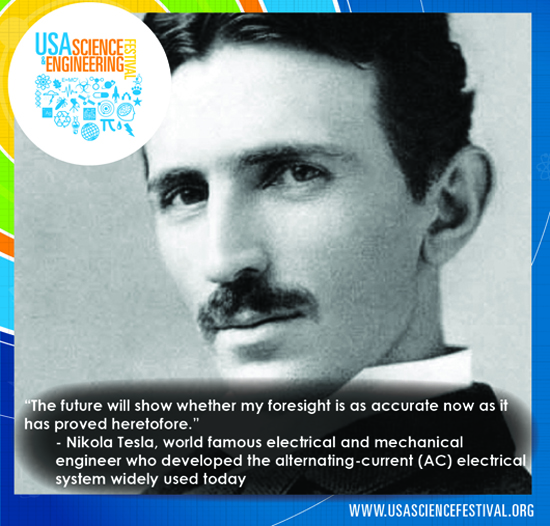 One of science's most amazing visionaries of all time, Serbian-American inventor Nikola Tesla
was considered a mathematical phenomenon since childhood, being able as a high school
student to perform integral calculus in his head, which initially prompted his teachers to believe that he was cheating!

This famous engineer and inventor was known for developing  the alternating-current (AC) electrical system widely used today and the discovery of the rotating magnetic field.  Tesla also proved  that the Earth can be used as an electrical conductor.

Learn more about the USA Science & Engineering Festival here. Save the dates for April 26-27, 2014 for the Festival Finale Expo in Washington, D.C.

Please check out my novel, Alternating Current, based on the legacy of Nikola Tesla!

Also, I would greatly appreciate a short post on your blog promoting the book to Tesla fans.

Thanks John! Thanks for your message. Contact us directly regarding the blog request.