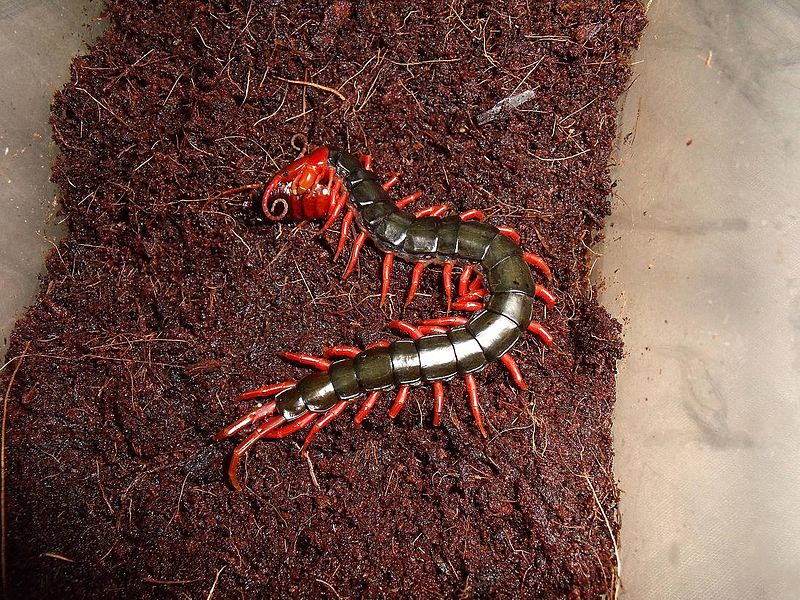 Image of a Chinese red-headed centipede from Wikimedia Commons.

Researchers from the Chinese Academy of Sciences and The University of Queensland have discovered a venom from centipedes capable of blocking pain more effectively than morphine!

According to the study authors, centipedes have appeared in the fossil records as far back as 430 million years. They are also one of the first land-dwelling creatures to use venom to incapacitate their prey as shown in the image above of a Chinese red-headed centipede (Scolopendra subspinipes mutilansis) snacking on a roach. The venom is secreted from a pore in the tip of their first set of legs that evolved into claws (forcipules).

Certain voltage-gated sodium channels (Nav1.7) are involved in the sensation of pain. In fact, people with mutated Nav1.7 channels are insensitive to pain.  In a new study published in the Proceedings of the National Academy of Sciences, USA this week, researchers purified a component of the venom that can specifically inhibit Nav1.7 sodium channels.  In the article, they describe it as "a highly selective inhibitor of Nav1.7 that is a more effective analgesic than morphine in rodent pain models." Prior inhibitors of Nav1.7 channels have been less specific resulting in undesirable side effects. The good news about this new peptide is that it is more specific and according to the results of this study had no negative side effects on blood pressure, heart rate or motor function.

As exciting as these findings are, more studies will be required to determine the safety and efficacy of this new peptide in the treatment of pain in humans.

An awesome post! Looking forward for more articles from you! Bookmarked!

Cite material for each

These poor centipedes..please eat cannabis and drink valerium tea for your pain. I put them on earth for those modes.

i love your blog and i think its going to my favorite!!i love viagra and cialis too!