I was thinking about writing something about the 2015 Hugo Award nominations train wreck, but you know what? Life's too short. So here's a couple of cute-kid photos from this morning's trip to the Children's Museum of Science and Technology over in Troy. They have these awesome construction toys, consisting of wooden rods with holes through them, and long bolts, washers, and wing nuts to connect them, and we spent most of our time in the building room.

On the left, you see The Pip, having picked up one of the screwdrivers that go with the set, and wearing his "fixing goggles." Because eye protection is important.

On the right, SteelyKid inside the awesome house that she built. She was actively involved in directing all of that, and only needed adult assistance for a few parts-- helping hold some unstable bits, and of course putting on the roof pieces, which were a bit above even my head.

The Pip doesn't quite have the attention span for something that ambitious, but he did contribute the "ladder" in front of SteelyKid, mostly by handing me pieces and saying "Here, Daddy, attach this." But they also have a room full of live animals, so he was plenty entertained...

And, really, isn't that way more fun than talking about the Hugos? 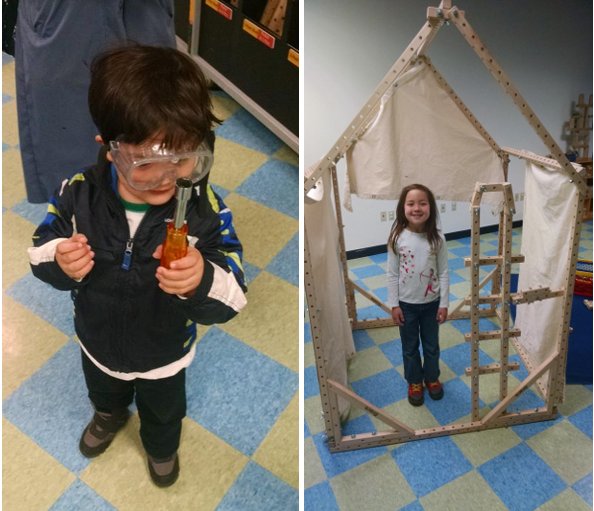 Left: The Pip with a screwdriver and his "fixing goggles." Right: SteelyKid inside the awesome house she built.
Tags
personal
Steelykid!
The Pip