Really, was there any question at all what the subject of today's photo would be? I mean, I'm a geek, I have a fancy camera-- of course I was taking pictures of the lunar eclipse. But more importantly, I was sharing it with SteelyKid: 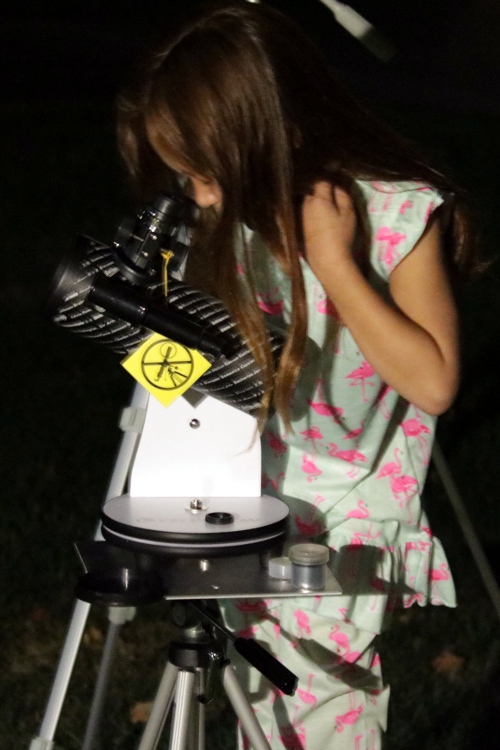 SteelyKid looking at the eclipse through her telescope.

That's SteelyKid looking through her telescope at the early stages of the eclipse. The light is from the lamp in our front yard, which would be no good at all for trying to see anything actually faint, but isn't really an issue when you're looking at the full moon.

The telescope-- a Celestron FirstScope, in case you missed her birthday-- worked really nicely. I have it set up on a platform the department machinist made for me, that screws onto a camera tripod, which also worked really well. We mostly used the widest-field eyepiece that came with it, because we could see the whole disk of the moon that way, and occasionally dropped in one of the bigger magnifications to look at details.

I also had a bigger tripod set up with my camera on it, to take some shots with the telephoto lens. Here are a couple of the better ones: 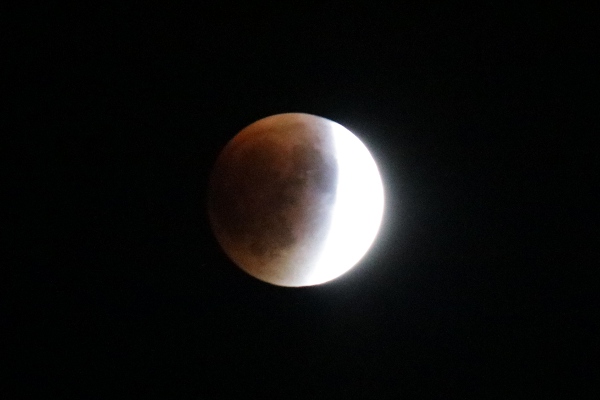 A little more than halfway to totality. 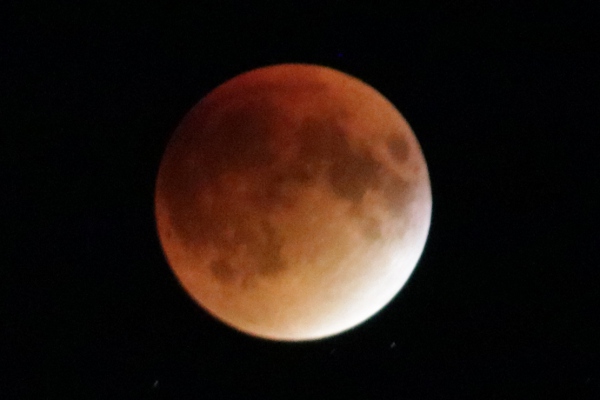 SteelyKid's review of the "Super Blood Moon": "Huh. I like the color. I was expecting something brighter, but that's a nice color."

This evening was a ton of fun, because SteelyKid was super pumped up. Largely because this let her be up and outside an hour and a half after she's usually in bed asleep; tomorrow morning will be, um, interesting. But it was totally worth it.

I note your photos are as mediocre as mine, which makes me feel much better now :) I noticed too late I didn't know how to turn off the display! I basically couldn't see what I was doing. I now have a long sequence of reddish spots in various stages of blurriness.

Don't forget about the total solar eclipse on 8/21/2017
https://www.youtube.com/watch?v=9C0SeDenPRo

My camera is only a point and shoot with a tiny sensor, but it does have a big lens which helps with lunar pictures. We were partly cloudy to start (in northern Illinois), and it just got worse as the eclipse proceeded, but I did get a decent shot in a cloud break before it was obscured by heavier clouds completely.

Your SteelyKid pic makes me yearn for my old telescope, which was an 8" Meade Schmidt Cassegrain. I sold it several years ago but really miss it now that I live where it would be more useful and fun.