Friday was yet another heavy kid-wrangling day, as the Pip had a minor surgical procedure in the early morning, which required general anaesthesia. This was done before 9am, but we had to keep him home from school for the day to watch for ill effects. Of which there were none, so he and I went out to the local science museum for a bit, to break up the cartoon-watching that was the other primary activity of the day. 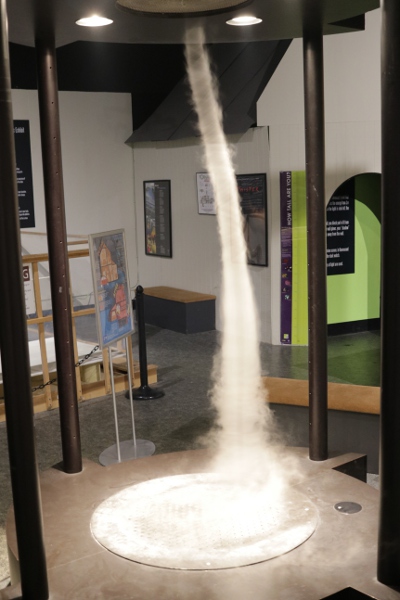 That's the artificial tornado exhibit-- a platform with mist rising from it and some fans set to blow in a way that introduces some vorticity. And when it's left alone for a bit, it sometimes makes these cool misty tornado things. Interestingly, they tend to be wider at the bottom, the reverse of the classic funnel-cloud shape. I suspect this is because the fans stirring things are at the bottom rather than the top, but my knowledge of fluid mechanics is about as solid as that column of mist, so I could easily be wrong.

Anyway, I thought they looked cool, so there's your photo of the (yester)day. Today's a soccer-coaching morning, followed by something or another for the afternoon, so don't expect great artistry, or on-time posting...

How to Build a Rocketship

The Pip's current phrase of choice is "How do you build...?" We get asked this several times a day. "Daddy, how do you build a glass?" "Well, you get the right kind of sand, and you get it really hot, so hot it melts. Then you make it into the shape of a glass, and let it cool down. Then it's a…

I've been neglecting the photo-a-day thing for the last week-and-a-bit, but for a good reason: I had a deadline of, well, today, to finish a chapter I was asked to contribute to an academic book. And while I fully realize that actually hitting that deadline is not typical academic behavior, I have…

Rhett is off at some sort of football game, but don't worry, I'll step up to make sure the Internet has pictures of kids playing soccer: SteelyKid in action at rec soccer. I'm assistant coaching the team (and the only coach for every other game), which makes it hard to get photos of SteelyKid,…

I try not to have this be Cute Kid Photo of the Day, but really, when these are the subjects, how can I avoid it? SteelyKid blowing a bubble toward The Pip, at MiSci. This is from yesterday's morning excursion to MiSci, where they have added a soap bubble area. This, of course, led to the kids…
Advertisment