There's a discontinuous jump here, if you're paying attention to photo-a-day numbering, but I'm skipping ahead of the cruise-centered backlog to write a more difficult entry.

Back in December, when we lost the Queen of Niskayuna, I had her cremated, and said I'd do something nice as a memorial, once the weather got nicer. We got one reasonably nice day in between bouts of rain yesterday, so I finished the memorial for Emmy: 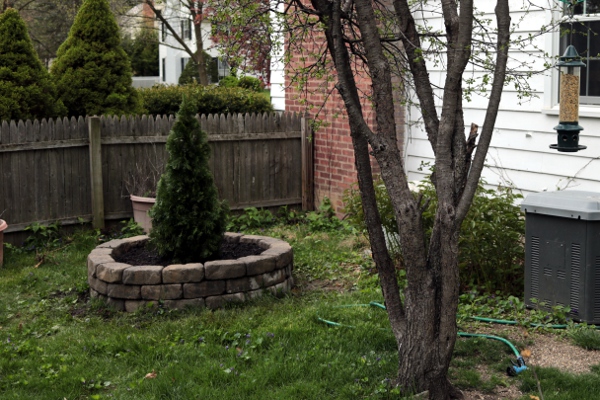 This is in the weird little cul-de-sac side yard of our house, next to the dining room. For a while I was trying to grow herbs in planters over here, but we never really used them quickly enough, so it's just been dead space for a while. So it seemed like a good spot for something decorative in memory of the Best Emmy Ever.

The shrub is a tall arbor vitae of the same type as the one at the edge of the patio/deck that was one of her favorite places to lie in the shade. You can see their relative placements in this wider shot: 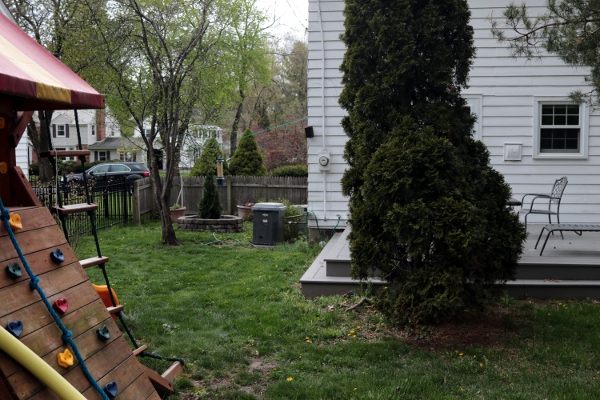 The original arbor vitae that Emmy loved, and her memorial shrub.

I dug down a bit before adding dirt to the planter, and mixed her ashes down in the bottom level of soil. Which was a suggestion from one of the dead-pet books SteelyKid's second-grade teacher sent home (which helped her, but man, that was a rough bedtime-story night...). So in a very distant way, some bit of her will get incorporated into the new tree, which seems like a very fitting memorial.

(I had thought of maybe burying the ashes in her usual spot by the original arbor vitae, but we're looking at extending the back of the house out a bit, which will probably mean removing that tree, so this seemed more permanent...)

And now I need to stop blogging for a bit, as the house is suddenly full of smoke, judging from the way my eyes are watering...

By some odd coincidence, there's a surprising amount of smoke here too.
That looks like an excellent place for Her Majesty.

That is a wonderful way to remember her always.