"It is one of life's bitterest truths that bedtime so often arrives just when things are really getting interesting." -Lemony Snicket

Those of you who live basically anywhere other than North America are in for a treat this Wednesday. All over Earth, of course, the Moon is nearing its "full" phase, where the half of the Moon illuminated by the Sun is completely visible from Earth.

And it will reach complete fullness on Wednesday night.

Now, most times, when this happens, the full Moon is completely visible from everywhere on Earth. But every so often -- about twice a year on average -- the Earth's shadow falls on the full Moon, causing a lunar eclipse.

And the one happening this Wednesday is visible almost all places on the Earth. Reaching its point of greatest eclipse at about 8:12 PM, Universal Time (which is about 4:12 PM, Eastern Daylight Time in the US), you might think you're likely to see a sight much like this. 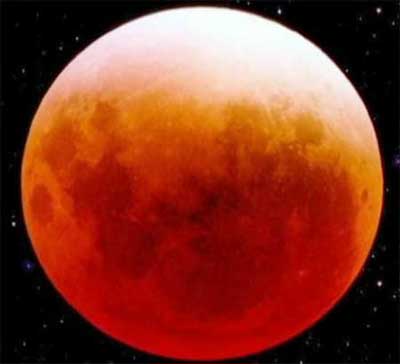 After all, the Moon doesn't disappear during a total lunar eclipse, but rather turns red, as a result of sunlight refracting through the Earth's atmosphere, and more red light landing on the Moon than blue light.

But the coming lunar eclipse is special for two reasons. Normally, the Moon is closer to one end of the Earth's shadow than another, and so the side closest to the edge appears whiter, while the portion closest to the center appears redder.

But for this coming eclipse, the Moon passes almost dead center through the Earth's shadow. 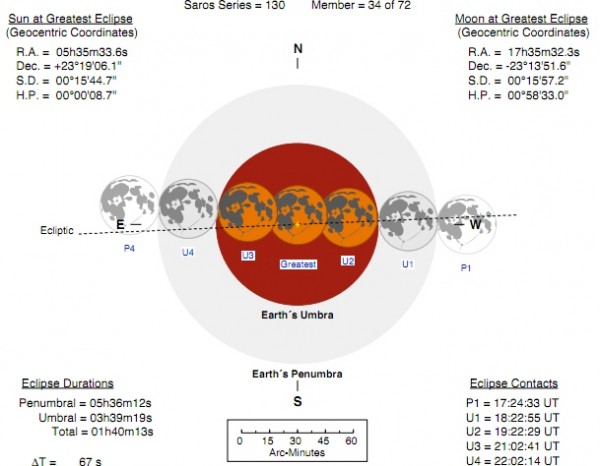 So what you're actually likely to see, if you watch it over the whole span of the eclipse, is a sight much more like this one: 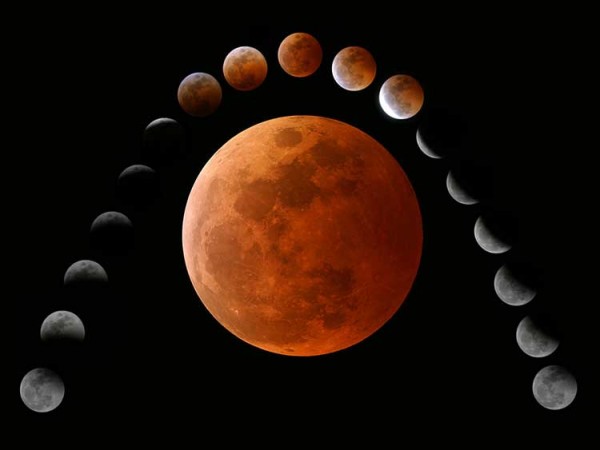 It's very rare to see the Moon be an almost uniform, red color; this only happens when the Moon passes through the dead center of the Earth's umbral shadow!

But passing through the center of the Earth's shadow means a second remarkable thing as well: this lunar eclipse will be long.

All told, it means everyone across the world -- basically except for North America -- is going to get to see something.

So if you've got clear skies at all, know your time zone and don't miss it!

For those of you -- like me -- in North America, we're not totally left out! Remember how I said these happen, on average, every six months? Come back out on December 10th, just before dawn, and enjoy the second total lunar eclipse of the year!

Is the diagram depicting the refraction of sunlight onto the moon correct? I thought that the index of refraction decreases with increasing wavelength for air (i.e. chromatic dispersion). Rather, blue light is being scattered (i.e. Rayleigh scattering) not refracted. Thus more reddish frequencies diffract around the earth to reach the moon.

I think the diagram is showing that the light that is refracted most has also traveled through the most air, and has had most of the blue scattered out. Where the light further out is still attenuated to some degree, but there is less scattering. That's how I saw the diagram anyways.

A full lunar eclipse is one of the most beautiful and dramatic things you can ever hope to see. Not only does it turn red but it becomes 3 dimensional. The bright glare of sunlight on the normal moon washes out any dimensional features but during a full eclipse it becomes very sci-fi and otherworldly looking.

I think some things are better left without an explanation. Do we always need to know the scientific why? Can't we just enjoy the magic of an eclipse or a firefly without dissecting it down to the bone? Just wondering at what point we turn off the scientist switch and experience the magic of nature.

On the rare occasions when clear skies and geography permits you to see something like this, you should certainly turn off the TV and try to get a good view.
This is not an option for me, I live at "U3", at north Sweden, and the clouds will probably hide what little remains of the eclipse.

PS If you have friends vacationing at the east or central Mediterranean, you should get in touch with them and tell them when and where to look.

Well, the lemurs are in for quite a treat.

You mentioned REFRACTION! I can now have a cold one!

Only if you can use your magic superpowers to predict when and where an eclipse will occur. If you want to feel like a special snowflake and not let other people know about it, then just wait for it to happen (assuming without scientific knowledge that you'd know it could possibly happen), since it happens regularly and naturally without any magic.

Really appreciated this information and it's presentation. Loved the video of eclipse.

For those who can't see it, the Weizmann Institute wrote yesterday:
"Wednesday's viewing of the total lunar eclipse will be a unique event that we hope will be seen all over the world. Anyone can log on and watch it online."
No link, though.
http://scienceblogs.com/weizmann/2011/06/a_dual-purpose_observatory.php

Magic and wonder are necessary preconditions of art and science.

To lose our child's mind of magical thinking and wonderous emoting is to lose our imagination. Curiousity is not a rhetorical or technical question.

We Art the magic and the wonder; or we Art not scientists and artists.

Dang! I caught the last lunar eclipse, but didn't have a telescope at the time! Now that I've got one, it's going to occur at 4:30 in the afternoon? Boo! Oh well. No point in critisizing the universe.

And for once, I, who have missed all the lunar eclipses in the first 26 years of my life, will be able to see one without having to miss bed. Yay Madagascar! (it's too rare that I can say that and actually mean it)

Grrrrr, it's cloudy in eastern Australia too! We've just had about 3 days of torrential rain. I got up early to watch it and everything :(

Cloudy in Hertfordhsire in the UK can't see a thing at the moment.

here in indonesia
the most beautifull lunar ecsplise that i ever seen!

It wan't only completely covered with clouds (8 oktas) but it was also raining all afternoon here in Buenos Aires.

It was an almost unheard of time here in the North Island of New Zealand. Nevertheless, it should have been worth getting out of bed for.

High cloud, with even higher stratospheric volcanic dust from Chile.

oh!! you people let come back toward ISLAM

there is nothing login in it..

they have asked for comments and dont reqd any explanation..u r not scientist...

Thanks Angel Gabriel - - that's what I was trying to say.

How can I teach the learners summary of that?

tnx for sharing this video, i learned a lot
:)

um..i'd say that i've been waiting up for some more interesting topics on science and i'd probably be thankful if i get to seek some more knowledge from ur website...anyway it teached me alot and thanks for sharing the vedio.