Weekend Diversion: A Story To Tell

“If history were taught in the form of stories, it would never be forgotten.” -Rudyard Kipling 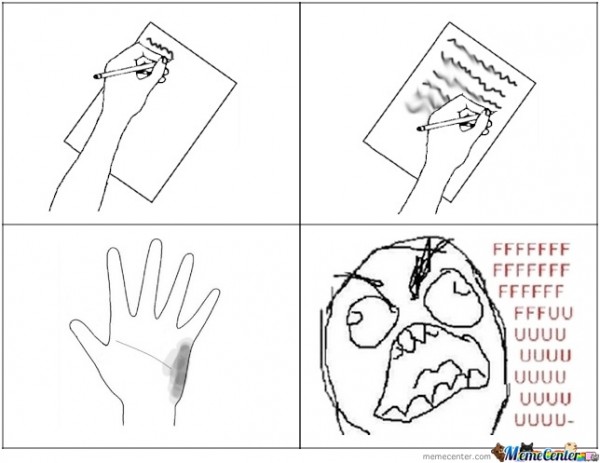 Image credit: samarth over at MemeCenter.

Of course, that was my issue to work through, and not only do I write all the time of my own volition now, I actually enjoy it. As We're About 9 would tell you, it's a (mostly) great feeling to be

With the whole Universe at my disposal, I certainly have plenty to write about. And while I've certainly taken advantage of the internet's plethora of pictures and videos, the time has finally come to embark upon a new journey. This November, I've decided to participate in NaNoWriMo, and begin writing a very science-heavy novel. 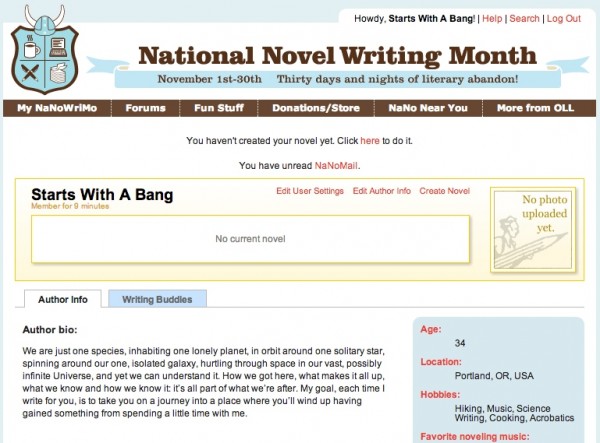 For those of you who've never heard of it, NaNoWriMo stands for National Novel Writing Month, where the goal is simply to get people (worldwide, despite the name) writing -- for their own edification -- with the goal of penning down 50,000 words during the month of November. Although you may not start writing until November 1st and you don't need to necessarily be finished by November 30th, the magic number of 50,000 words puts you well over the line between a novel and a novella (which is, officially, 40,000 words) and is the approximate length of many great novels, including Brave New World, The Great Gatsby and Hitchhiker's Guide to the Galaxy.

Best of all, if you're so inclined, you can sign up to write one yourself, and do it alongside me! My screen name there is Starts With A Bang, and from November 1st to the 30th, here's what I'll try to be creating. 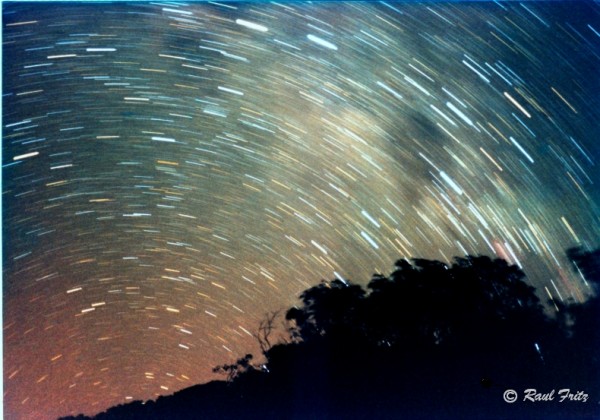 Image credit: Raul Fritz of http://clouds-air.webs.com/; note the Southern Cross and the Coalsack Nebula in the upper right of the image.

A fictionalized history of science, where we follow our protagonist throughout a lifetime of discovery of his place in the Universe, of what the physical Universe actually is, and how he comes to know it. 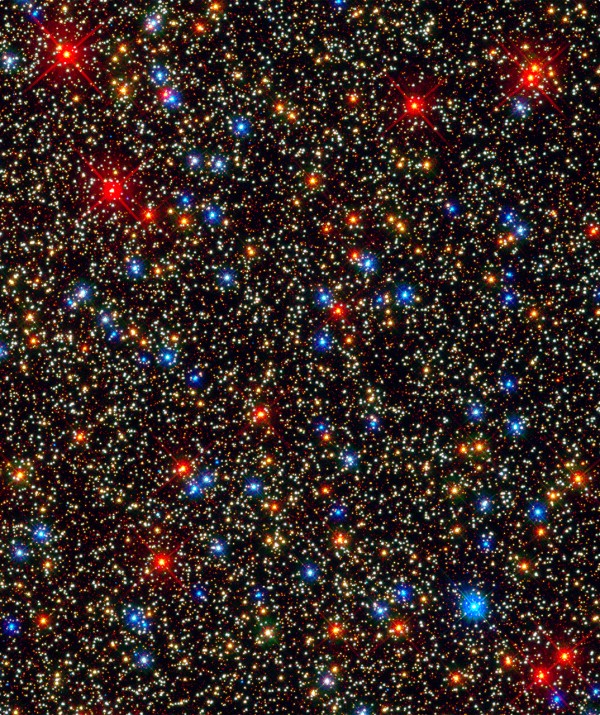 This includes his own world, the birth, life, death, and future of stars, the discovery of galaxies both nearby and distant, and how it all comes together to give us a picture of our Universe throughout space and time. 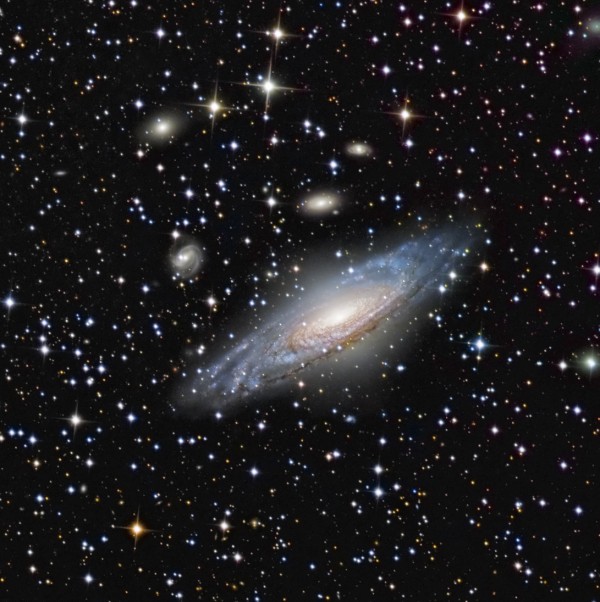 It will be a big, new challenge for me, to try and paint such a vivid story without the aid of images, and without any comments or feedback. But I think that Kipling is right, and that if I can communicate what we know and how we know it through an interesting story, rather than simply writing as plainly as I normally do, something either very good (or very bad) is likely to result.

But there's no point in not trying! So this November, I'm going for it. 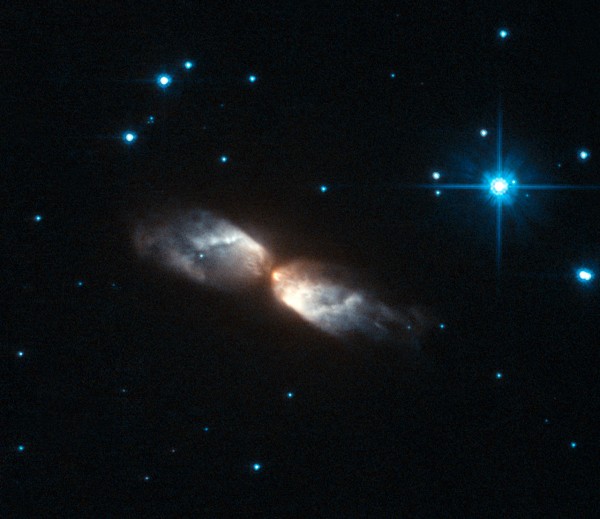 I'll be spending this October planning it out and outlining it, and I'll likely spend December (and maybe January) revising, editing, and polishing it; if all goes well, you'll get a chance to read it when it's complete.

If you want to participate alongside me, sign up at nanowrimo.org, leave a comment here and let me know how to follow you, and I'll keep you updated as to how it's all going. It's ambitious, it's exciting, and it's probably going to be colossal -- either as a failure or a success -- but you never know what you can do unless you try!

Yay! Another science person doing Nano. For some reason, I rarely run across Nano participants who do science-y things as a day job. If you're curious, I'm also syaffolee on the Nano site.

Good luck on your book. I look forward to reading it when its finished. You should consider writing a book about you writing this book. :P

This is amazing! If school didn't preoccupy all of my time, I would participate as well. Is there any way to read what yo have written when you're done? I'd love to read it, (even buy it if it were possible!)

Maybe I will. Let me think about it for a day or two.
I need to know the rules and how it works. Like
do I write online for the world to see as I go, a first daraft on the fly thing. Or can I edit as I go. Or do I submit when I'm done.
I 'll let you know in a couple days after I check it out further.
Got to run now.

Like any creative activity (art, music, science, gardening); writing is a great pleasure. I do these activities;because I need to. Creative activity is a necessity like eating and exercise.

Sure we can talk about the motivation and the reward. But as in sports, only a minimum motivation is needed to arrive at the ski slopes, to jump in the pool, to kick the ball. Then the activity takes over; you ski, swim, play to exhaustion without effort. If not then pick a different sport; one that you get addicted too.

Art, science, exercise, human relations are all addictions. We form habits, we become addicts to physics or poetry.

So the challenge is to take on another positive addiction and become even more addicted to writing, meditation, people or something.

I'll write a novel in November. I'll use the name OKThen.
I need to think on my next novel that I am writing. Not the one that I've finished (self published) or the one that I'm working on (well).

I just checked. Every night, I invent in the telling, a bedtime story for my son. Mostly they are forgotten, sometime I write them down. A week ago story I told in 20 minutes, that raced and typed in 2 1/2 hours afterwards, is 3000 words. Raw and unedited.

I attempted the 50 000 word novel a few times, several years ago. Never achieved it but the forum discussions were an enjoyable diversion. Good luck, the story idea sounds good and I'm sure you'll do a good job of it.

Your 'plain' writing is pretty bloody good as it is.

I very much look forward to your more coloured and emotive writing!

Ethan
Your project has motivated me.
I have always wanted to write a long children's story. But I have succeeded only with short children's stories. (none published yet)

My aim is that this story is suitable to read to my five year old son. In fact I'm begeinning to discover and test new ideas on my son at night at story time.

My novel's title is Mr. Boy and Robot

My writing name is OKThen

I've just added you as a Writing Buddy. I hope that is OK.

I mostly write alone. Though I have attended wrting workshops and found those helpful.

So feel free to bug me about anything.

They send you motivational emails and encouragement.

Go for it Ethan. You encouraged me. I fianlly got a children's science fiction idea thanks to your encouragement.

But I really joined because I'm a member of your blog and I do write. My NaNoWriMo name is OKThen and I'm watching you. You are my writing buddy. (sorry if that's a burden)

Your word count needs to get going as does mine. But the key thing you need to not give up on your idea. Work that idea.

Don't give up. Writing fiction is only a little different than writing fact. The main difference is plot. a novel is not a history of the world; it is a story within a world. A special story, begining on a special day; and we want to hear that special story of yours.

But that's 7,000 (okay, 6,941) more words than I had written two weeks ago. And a story is forming there, in a fictional world, with characters, places and a sky that didn't exist at all just 15 days ago.

The ball is rolling, and even if I don't make the 50,000-words-by-November-30th deadline, that doesn't mean it was a failure. It means that success just takes a little longer.

Ethan
You are correct.
The formation of your story characters, fictional world etc is more important than word count or finishing 50,000 words by some date.
Thanks for the update.
Glad the ball is rolling.
All the best.