"These are strange and breathless days, the dog days, when people are led to do things they are sure to be sorry for after." -Natalie Babbitt

The dog days may come at the tail end of summer, but it's the winter months that brings us the best views of the Dog Star, Sirius, the brightest star in all the night sky. 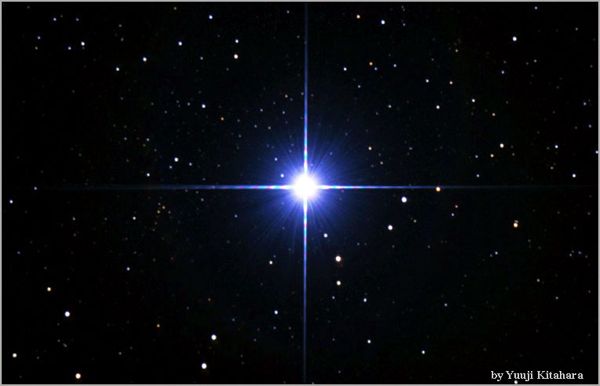 And if you look towards the southeast in the early evening -- or towards due south around midnight -- you'll find Sirius twinkling wildly in the sky, brighter than all other stars (over three times brighter than Arcturus, the next brightest star visible from mid-Northern latitudes), and trailing the constellation of Orion. 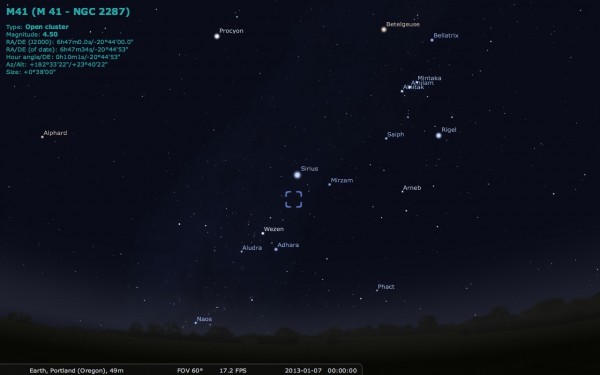 Sirius is the right combination of intrinsically bright (it's an A-class star, hot, bright and blue) and close (it's only 8.6 light-years away, the fifth-closest star system to us) to outshine every other star visible from our Solar System. Just four degrees south of Sirius, though, lies the subject of this week's Messier Monday: the open star cluster Messier 41. 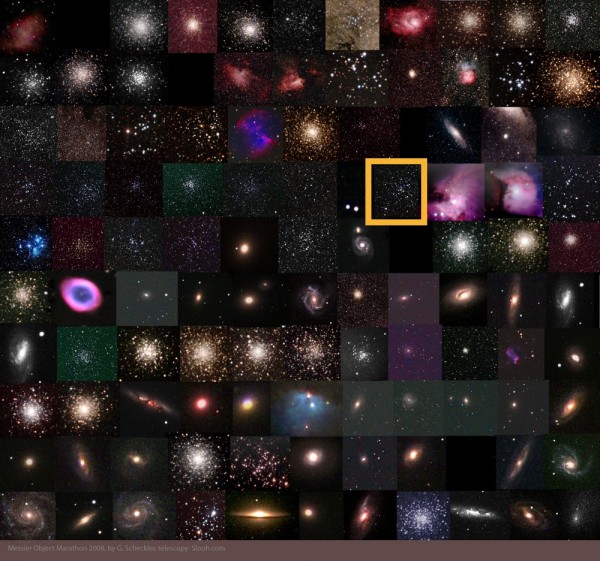 Messier 41 is the only Messier object in the constellation of Canis Major, but that doesn't mean you should pass it up. On the contrary, viewing near midnight all this month is your best chance to get a detailed view of this object, known since at least the 17th Century and possibly even as early as Aristotle!

Why's that? Because with very dark skies and good visual acuity, Messier 41 is just barely visible to the naked eye one it rises high enough in the sky. 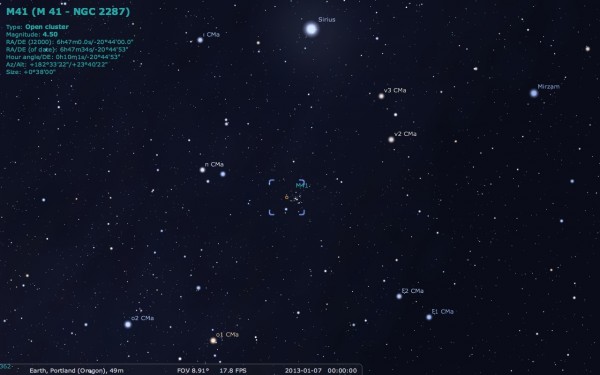 Image credit: me, with Stellarium again.

Although there are about 100 stars in there -- many of which are intrinsically brighter than Sirius -- this star cluster is some 2,300 light years distant from our Sun, which is why it appears so faint from our perspective.

But a telescope can help bring that distant light to us in stunning detail. 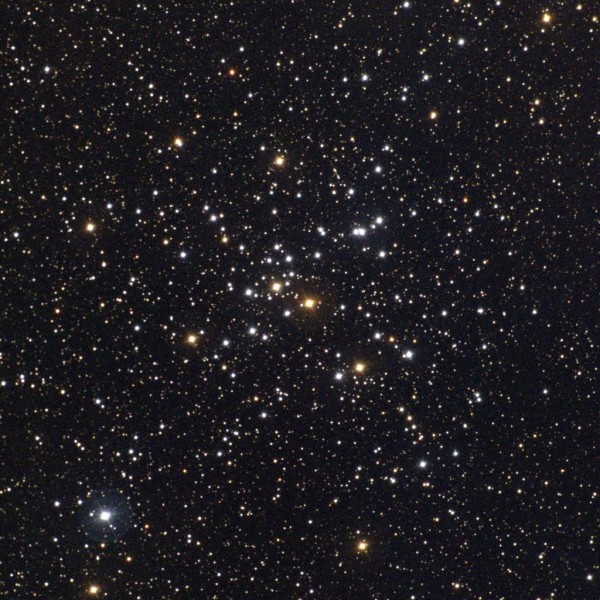 Those big, bright orange stars littered throughout the cluster are red giants, stars that were originally just a bit more massive than Sirius that have burned through the last of their hydrogen fuel in the core that have expanded and become red giants.

The brightest star in this cluster is the red star found at the center of the cluster -- now a class-K giant -- which is what happens to a bright blue star that reaches the end of its main-sequence life. 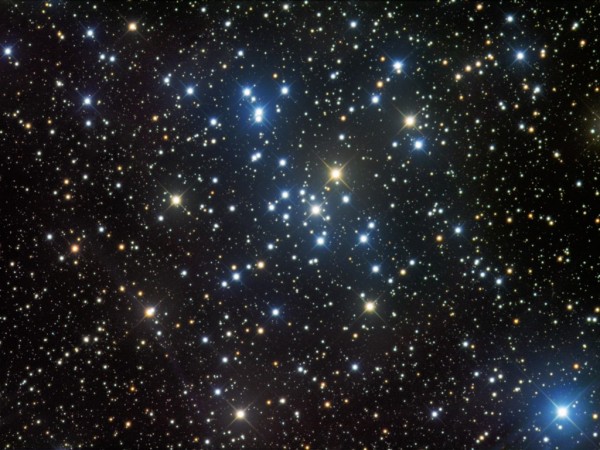 This cluster is still relatively young at maybe 200 million years of age, which makes it older than the Pleiades but still young enough to contain a sizable number of hot, bright blue B-class stars.

Although the colors of the red and blue stars may jump out at you in the images I've shown you here, they're comparable to one another in total brightness. At least, that is, in visible light; one of the fun things about star clusters is that if you view them in the infrared portion of the spectrum, the red giants tower over all the other stars. The infrared image, below, leaves no doubt as to which of the red giants is the brightest, and also helps showcase a few very red stars that shine brightly in the infrared but only modestly in visible light. 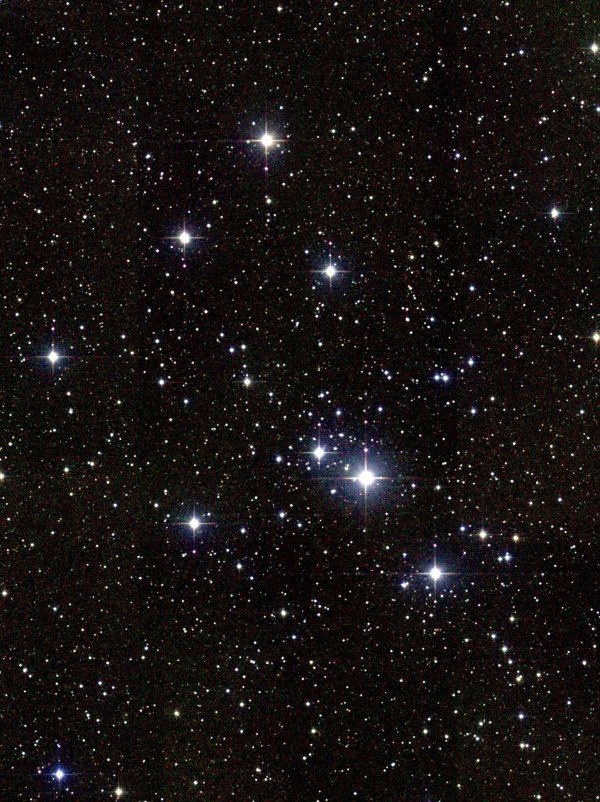 The prominent infrared stars that appear red/orange in the visible are red giants, while the less-bright ones that appear visually whitish are subgiants: stars leaving the main sequence on their multi-million year evolutionary journey, where they will eventually become true red giants themselves.

If you've got an excellent pair of astronomy binoculars (or a low-magnification telescope), you may enjoy one of the gorgeous wide-field views of this open cluster, which really highlights just how a cluster of stars can stand out against the backdrop of an otherwise unremarkable patch of sky. 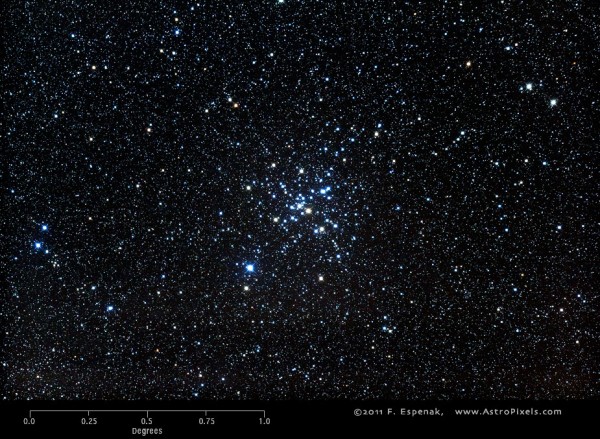 But it's it's clearly the cluster itself -- relatively small at just 25 light years across -- that steals the show in this patch of sky. 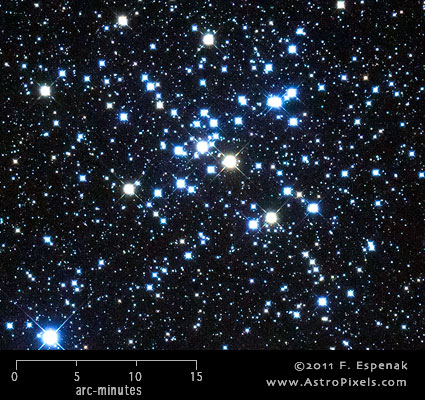 And while there are no Hubble images of Messier 41 (yet), it's hard to imagine any professional coming up with a better image -- either wide-field or focused on the cluster itself -- than Emil Ivanov. 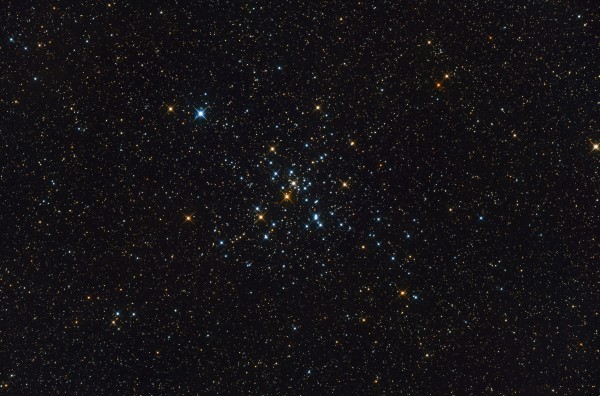 But it's the zoomed-in, cropped version that focuses on the cluster, M41 itself, that's my favorite view of this winter wonder. 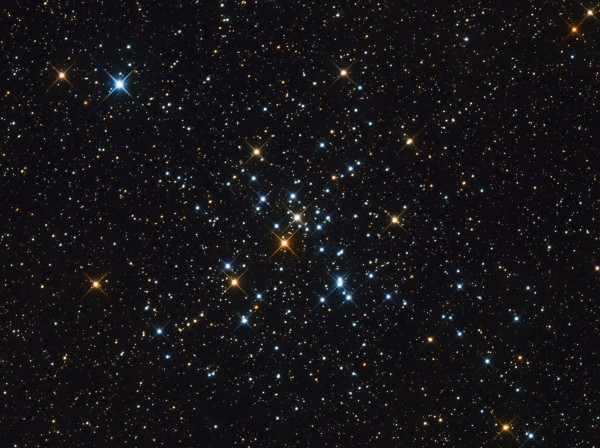 So that's Messier 41, one of the best Messier Mondays (or any clear night) during all of January! Including today's entry, we've covered an even dozen:

Which one will get the royal treatment next week? Come back to find out next Monday for another window into the wonders of our night sky!

Emil is an opera singer!? Nice! Just wish I had the cash laying around to get some of the telescope equipment some of these people use. Wow, $$$!

Get a 90mm F10 scope from Celestron o rSkywatcher or whatever for about $250.