Messier Monday: A Cluster Beyond Our Galaxy, M79

"Anyone who keeps the ability to see beauty never grows old." -Franz Kafka 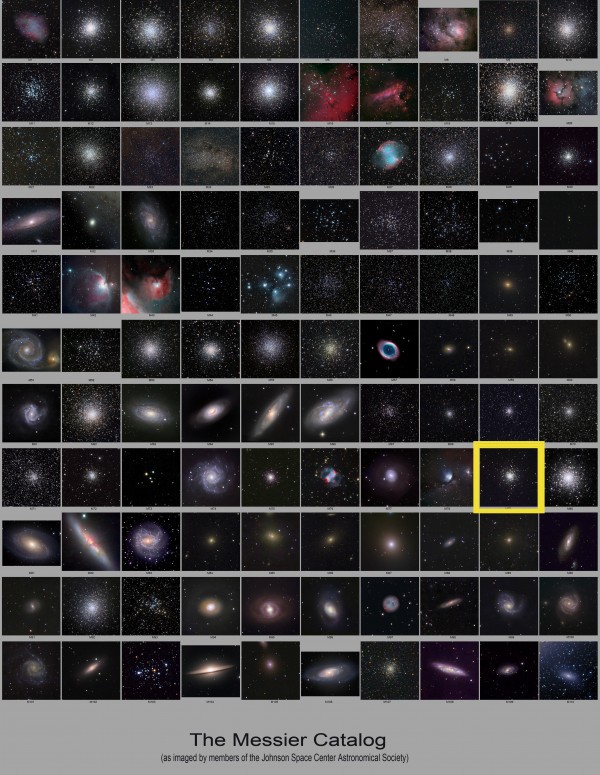 While the Messier catalogue boasts 29 globular clusters -- dense collections of hundreds of thousands of ancient stars -- only two of those are from outside of our own galaxy!

Globular clusters in general are found in the halos of galaxies, with the Milky Way containing around 200 of them and some giant ellipticals containing more than 10,000! As the famed winter constellation Orion rises higher and higher in the sky in the early part of the night, a new group of Messier objects becomes visible to skywatchers across the globe, and today we highlight one of the rare extragalactic globulars: Messier 79. Here's how to locate it. 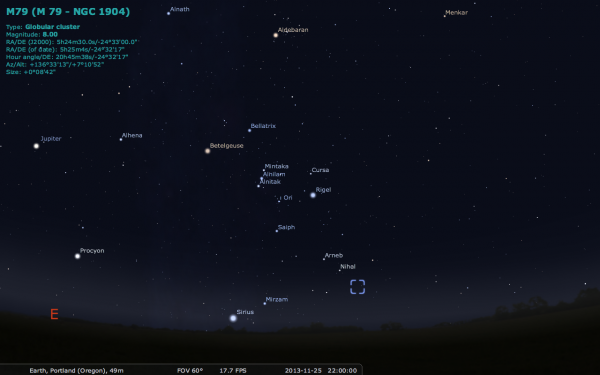 By about 10 PM tonight -- and progressively earlier as the winter comes on -- Orion will be well over the eastern/southeastern horizon, with the young blue star Saiph lingering the lowest in the sky. If you follow the imaginary line from Betelgeuse to Saiph and curve slightly towards Rigel, you'll run into two prominent stars even lower in the sky: Arneb and Nihal.

These two stars are the brightest members of the constellation of Lepus (the hare; don't call it a bunny), and will guide you to Messier 79 all winter long. 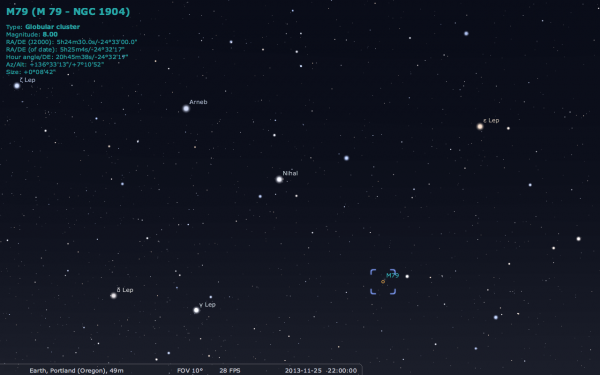 If you now draw an imaginary line from Arneb to Nihal and continue on about 1½ times that distance, you'll come to a fifth-magnitude (naked eye under decent conditions) star known as either HIP 25045 or HR 1771, depending on which bright-star catalogue is your favorite.

The good news is, if you can find this star, Messier 79 is only half-a-degree away, and if you train your telescope or binoculars in that region -- with good seeing -- you really can't miss it. 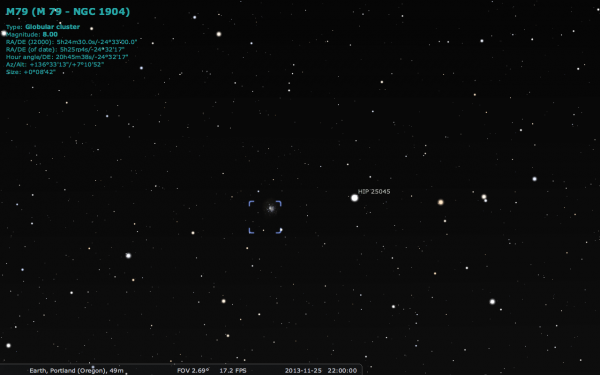 A faint, fuzzy cloud of stars, Messier recorded it one year after his assistant, Pierre Méchain, discovered it in 1780. It was recorded as a nebula without stars (as all globulars appeared in Messier's instruments), and described as:

this nebula is beautiful; the center brilliant, the nebulosity a little diffuse; its position was determined from the star Epsilon Leporis, of fourth magnitude.

If all you had was a small instrument, this is the view you might see. 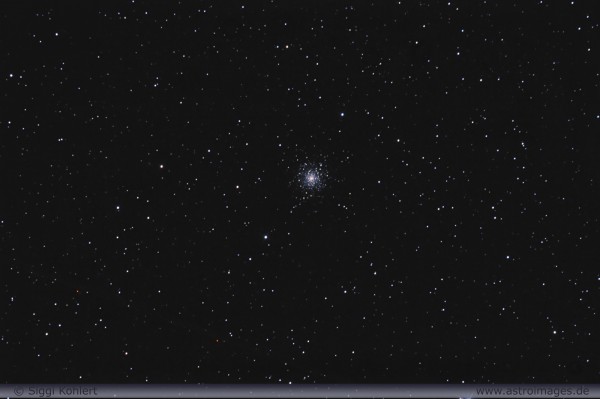 It appears tiny on the sky, but that's not because it's a small object, not at all! When we take a deep look inside, what we find is simply stunning. 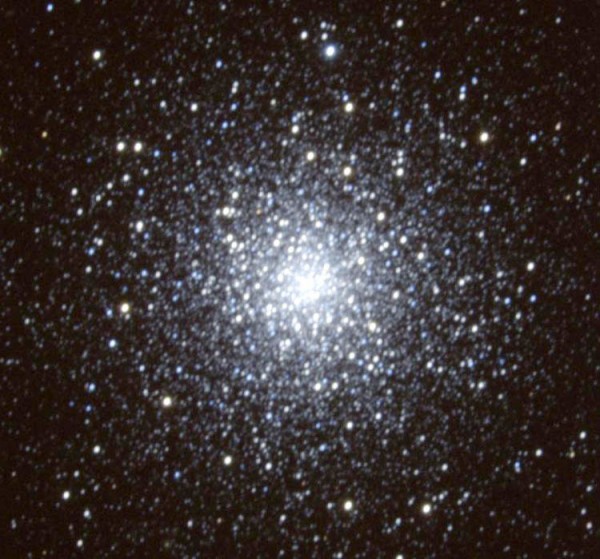 This cluster is loaded with red giant stars, with plenty of blue stragglers lighting the way as well. Based on the discovery and observation of these very standard stars -- and the well-known color/magnitude relations -- we can pinpoint this object as being 41,000 light-years from Earth and 60,000 light-years from the center of our galaxy, making it one of Messier's most distant globulars.

But unlike the other globulars, this one is found in a very suspicious area of the sky. 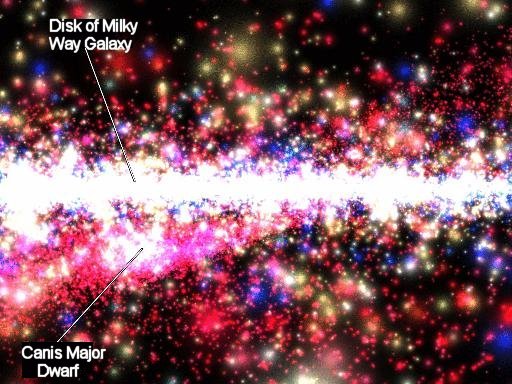 Image credit: © The Worlds of David Darling, via http://www.daviddarling.info/.

Just below the plane of our Milky Way, the Canis Major Dwarf Galaxy is slowly being devoured by the gravitational pull of our galaxy on this soon-to-be-former member of the local group. As it stands right now, there's a great tidal tail of material being pulled off of this object, and everything that's bound to it -- including its globular clusters -- are slowly being absorbed into our own galaxy! 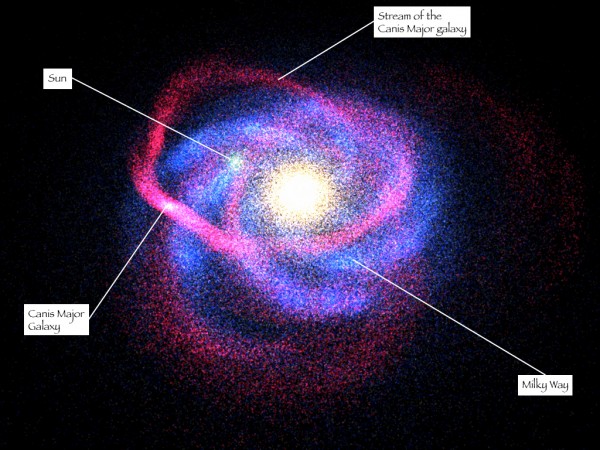 The way to be sure that this cluster has the stars we think it does is to look at it in different wavelengths. If we want to find blue stars, all we should see are blue stragglers close to the core, and those should show up in the Ultraviolet portion of the spectrum. 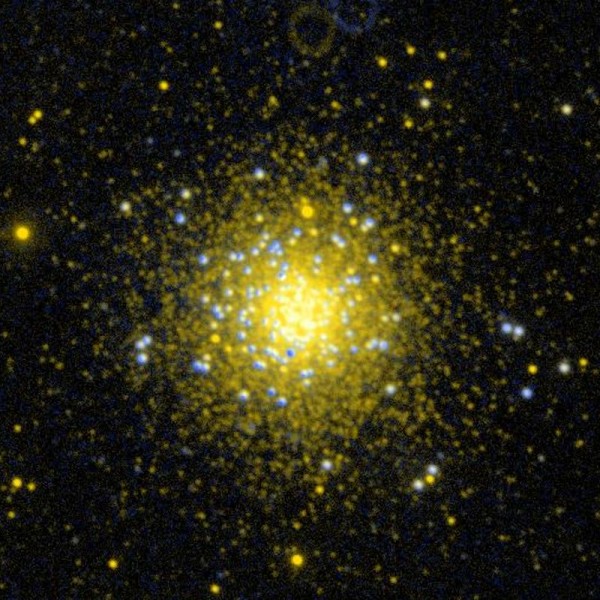 And if we want to know about red giants, we should be looking in the infrared, where these prominent stars should shine brightest. In addition, we ought to be seeing a different concentration: red giants in a larger sphere, blue stragglers close to the center.

That's exactly what we see, and very high-quality ground images can even bring this out. 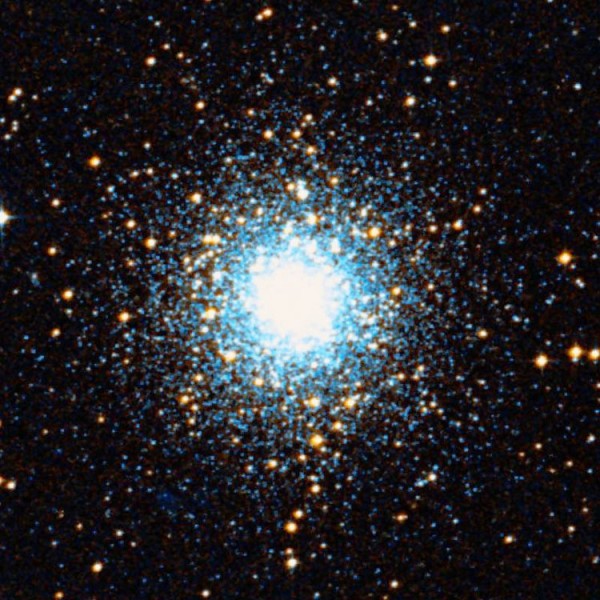 This is somewhat younger than many globular clusters found in our galaxy, at an estimated age of "only" 11.7 billion years. That might seem incredibly old, at around 85% the age of the Universe, but when you consider that many globulars are 90-95% as old as the Universe, this one is younger than many. This age determination is supported by the fact that it has 3-5 times as many heavy elements as some of the oldest globulars! 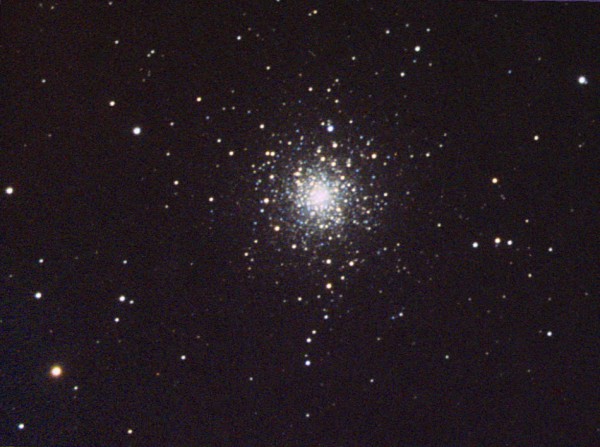 With hundreds of thousands of stars in a radius of around 100 light years, this cluster would be a lot brighter if there weren't so much galactic dust in the way from the nearly-directly-intervening plane of our galaxy. As it is, things are just clear enough for the Hubble Space Telescope to have taken a quality look at the core of this object. 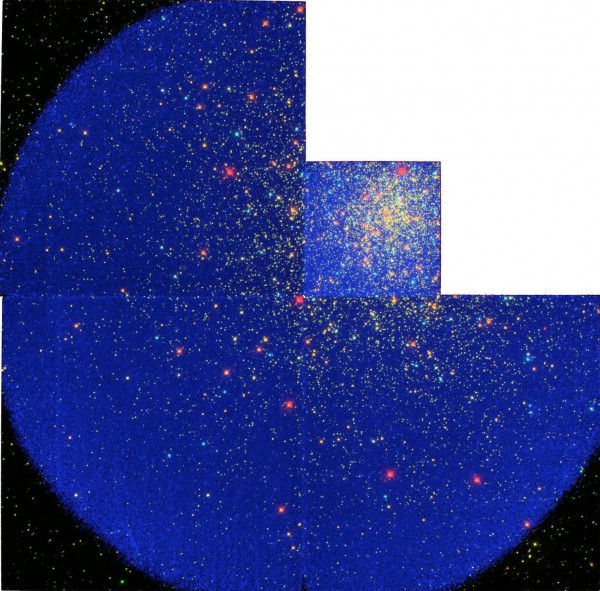 What you're looking at is raw, unprocessed data from the Hubble Legacy Archive of Messier 79. My image processing skills aren't good enough to really bring out the best of this object, but I will showcase that the core, here, contains a huge number of tremendously interesting stars... 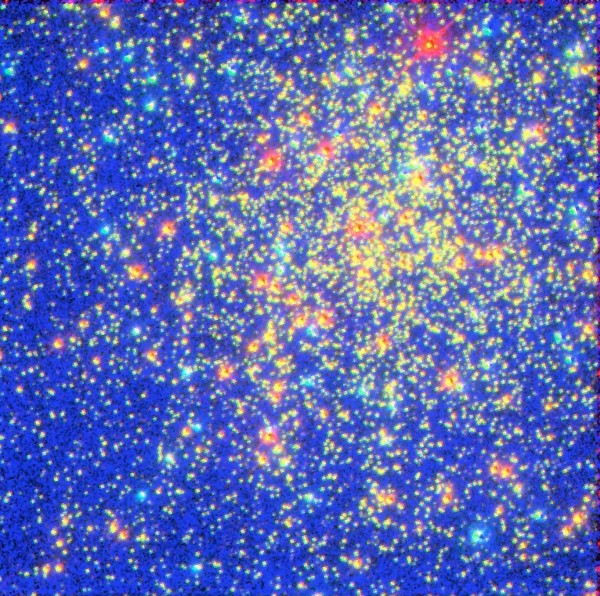 and that if you were interested in taking a dive through the center at maximal resolution, this is the sort of stellar neighborhood you'd see! For comparison, if you put the Sun at the center of the image, below, the nearest star to us -- the Proxima/Alpha Centauri system -- would appear about 100 pixels below the bottom of this image.

That a lot of stars! And that's a glimpse into the Universe just slightly beyond our own galaxy, and a great way to wrap up another Messier Monday! Including today’s entry, we’ve explored at the following Messier objects:

Come back next week, where another deep-sky object -- and another unique story about our Universe -- awaits you here, only on Messier Monday!

I love these Messier Mondays! :-)

Have never before seen the likes of CG simulation showing the flow of canis galaxy into our own. Very cool.

Since we don't have an "outside" image of our own galaxy, we are thought that it looks like an average spiral galaxy. Actually it's much more exiting! :)

Thank you for that. Now my old mental image of our galaxy has been updated to include awesome galaxy merger.