When you take a large amount of mass and put it all together in a small volume of space, you fully expect gravity to do its thing, and eventually collapse things down as far as they'll go. You can imagine that for compact masses with large distances between them -- like planets in the solar system or stars in the galaxy -- this will take a very long time: longer than the age of the Universe. 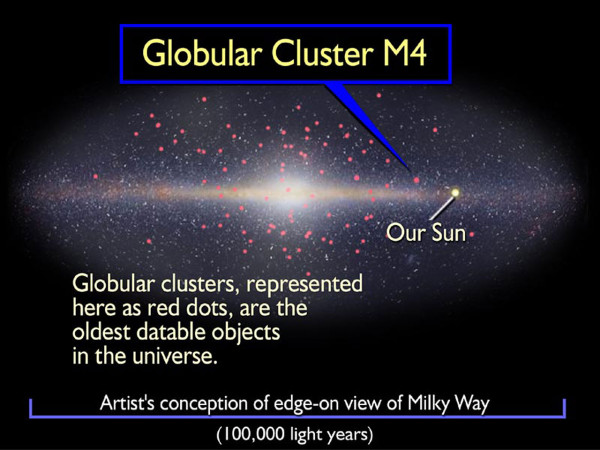 Image credit: NASA/ESA and A. Feild, of the known globular clusters around the Milky Way.

But what about globular clusters: hundreds of thousands of stars collected in a spherical region of space just a few tens of light years across? While there is some collapse that occurs, there's also ejection and mass segregation, keeping the clusters intact for timescales far longer than the Universe has been around. 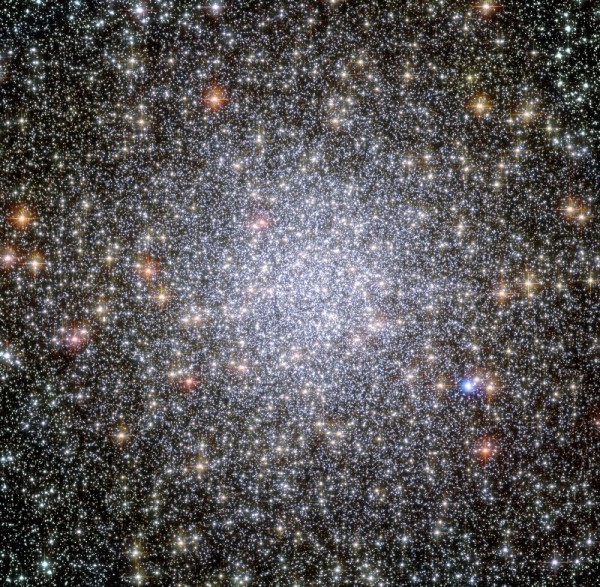 Yet we don't know everything about these objects; find out what we do (and don't) know on this edition of Jillian Scudder's Astroquizzical!

If you use an analogy to the kinetic theory of gases, with stars taking the place of atoms/molecules/particles, then pressure supported would seem to be a natural term to use. Instead of particle elastic collisions, we have gravitational interactions. I think its a useful if imperfect analogy.

So occasionally a star ends up with greater kinetic energy than the escape velocity, so it can evaporate (become unbound and wander away). On average these tend to be lower mass stars.

Question do we know of any free-range globular cluster (i.e. not bound to a galaxy)? It must sometimes happen during galactic mergers, that a GC gets too much kinetic energy and ends up being ejected into intergalactic space.

Could a really large cluster, such as R136, create a "young" globular cluster?

However, pressure is the result of collisions between the gases and the container.

It's of very limited utility in open intergalactic space...

"that a GC gets too much kinetic energy and ends up being ejected into intergalactic space."

There isn't binding energy of anything like the order needed to keep it together as a unit. It would be scattered and though there may be some higher-than-usual clump of stars, there won't be a notable cluster of them.

For some reason my comment is not showing up...

It's a good idea...wow might be right but you do get them. Google "Intergalactic Globular Clusters"

Two links or more in a post makes it await moderation.

Yes, but out of a 100 billion objects, one-in-a-million chances pop up nearly a million times.

Look at the Ursa Major moving group. It's a nearby open cluster that is being ripped apart and now no longer looks like an open cluster. Because the binding pull of gravity is too weak to keep them together and they will be ripped apart by the rest of the galaxies' pull on them.

Yet we can see open clusters too. It takes time for the ripping apart.

“But what about globular clusters: hundreds of thousands of stars collected in a spherical region of space just a few tens of light years across? While there is some collapse that occurs, there’s also ejection and mass segregation, keeping the clusters intact for timescales far longer than the Universe has been around.”

Maybe the problem would go away if the Standard Model had another assumption similar to the one about homogeneity. The new assumption could be called something like “longevity.”
"Longevity": Global clusters and other examples of lumpiness do NOT have to collect or collapse or otherwise become more lumpy IF viewed on the LONGEST timescales (i.e. timescales LONGER than the universe’s age).

"The new assumption could be called something like “longevity.”"

But maybe that's what you think of science.

This is a question I have asked (perhaps on this forum or elsewhere). The point was that the clusters seem to have little net angular momentum, otherwise, I suppose, they wouldn't be globular. With the milky way, for example, you can surmise that its net angular momentum leads to its flattened shape and helps prevent collapse.
IIRC, an answer I did get seemed to imply the globulars would collapse eventually, but the collapse time was longer than the current age of the universe.