"The mystery about α is actually a double mystery. The first mystery – the origin of its numerical value α ≈ 1/137 has been recognized and discussed for decades. The second mystery – the range of its domain – is generally unrecognized." -Malcolm H. MacGregor

We assume that the fundamental constants are truly constant, but they don't have to be. The speed of light is the same everywhere, but it could have been different elsewhere, either in space or in time. The same is true for other constants, like Planck's constant, the gravitational constant, or even the fundamental charges or masses of particles. You might not think it's likely, but the evidence indicated otherwise. 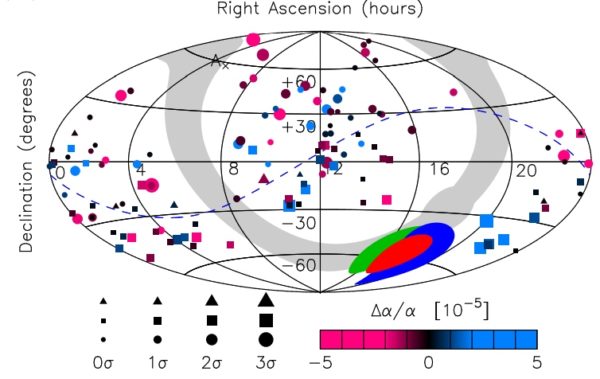 Over the past 20 years, time variations and spatial variations in the fine structure constant, which determines the force of the electromagnetic coupling, have been observed to about 5 parts in a million in different locations and at different distances. It was a disputed but intriguing finding, but new evidence was just released conflicting with those results. Instead, the fundamental constant, α, once again appears to be truly constant, to better than 1.3 parts in a million, thanks to the new results from Arecibo. 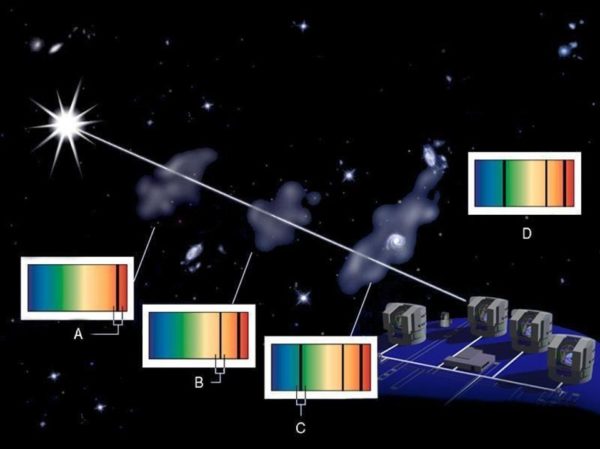 An ultra-distant quasar will encounter gas clouds on the light's journey to Earth, allowing us to measure α. Image credit: Ed Janssen, ESO.

There's always more work to be done, but one of the greatest puzzling results from the astrophysical community might not be a puzzle after all!

Are The Fundamental Constants Really Constant?

"A constant struggle, a ceaseless battle to bring success from inhospitable surroundings, is the price of all great achievements." -Orison Swett Marden One of the greatest assumptions we make in our study of the laws of nature is, well, that they're laws of nature, not particularly special to where…

The Worst Kind of Science Hype

"We've learned from experience that the truth will come out. Other experimenters will repeat your experiment and find out whether you were wrong or right. Nature's phenomena will agree or they'll disagree with your theory. And, although you may gain some temporary fame and excitement, you will not…

"In the current cosmological model, only the three lightest elements were created in the first few minutes after the Big Bang; all other elements were produced later in stars." -Fumagalli, O'Meara and Prochaska, 2011 When it was first conceived, the idea of the Big Bang was spectacular for the fact…

"In order for the light to shine so brightly, the darkness must be present." -Francis Bacon If you had previously thought the Universe contained a certain amount of stuff, like stars, galaxies and matter, then you might think that learning it had ten times as many galaxies might mean it had ten…

It's kind of cute that the "quote of the day" that I got with this one was from one Alice Zhang and ended with "nothing is irreversible." Anyway, what's with characterizing the Particle Data Group electromagnetic constants as fundamental? They have units.

HAving units doesn't make them not fundamental. It just makes the value of them dependent on the units used.

I do have some confusion about fundamental constants. In Ethan's article about the subject last week, he points out that the fundamental constant is the fine structure constant, rather than the speed of light, Planck's constant or the elementary charge. The problem I am having is that it seems to me that if that's really the fundamental constant, then for instance doubling the speed of light while simultaneously multiplying the elementary charge by a factor of 4 should not cause a significant change in the universe. Such a change would leave the value of the fine structure constant unchanged.

"In Ethan’s article about the subject last week, he points out that the fundamental constant is the fine structure constant"

Well, that's where your problem lies.

Indeed the fine structure constant is only fundamental to quantum mechanics, and has nothing to do with, for example, mass or gravity. But it is useful in some scenarios where the interplay between quantum effects and electromagnetism are dominant.

But it is in no way the fundamental constant.

Actually, that should be fundamental to quantisation of light rather than quantum *mechanics*, but broadly speaking the finestructure constant is useful philosophically because it is dimensionless therefore the same number in any measurement system. Like the ratio of a circle to its diameter. Always Pi.

Therefore we could find a transmission from aliens by a repeat of the value of the fine structure constant, a value that is the same for all species in this universe, and has digits that preclude most random processes from finding by chance.

Pi could be used, but it is infinite in size, so how do you know when the 3 is the first digit of the number and not the 874th?

a sort of follow up question. Isn't it the case with some pairs of constants that what it sums in the end is that you have to make a certain measurement, not so much which is more fundamental. i.e. with fine structure... if you measure fine structure and know charge coupling constant.. you can derive the speed of light. but on the other hand, if you measure speed of light and coupling.. you don't have to measure fine structure. But you do have to measure a certain value that nature has, which is constant?

They're all constant. They're not all the same value if you change the units, but then again units don't tell you much.

I would suggest you go read the link I gave above, since it's written by a graduate and is fairly simple to grasp. You can alternatively look at the wiki page, and then the citations. But that could end up being less clear.

I did read it quickly before I posted the question. The reason I posted was because some of the things written there seem to me slightly different then what I read about fundamental constants elsewhere.

The article by Baez seems to look at the constants through GR and SM. That's partly my question. You have one set of constants when you i.e. look at standard model.. and you have another if i.e. you look at Maxwell. How do you decide which is "more" fundamental? i.e. the article you linked doesn't mention vacuum permitivity. Yet, in other places, it's considered a fundamental constant. That's what's confusing me, and that's why I asked if it comes down to measurment of something. And that something is closely tied to the theory or mathematical model that you pick?

Which of those two are closer to reality, SL?

And, yes, permittivity appears to be a constant, just like the gravitational constant. The problem I have here is that the link was to indicate about constants and clear up the misconception about them having to be dimensionless.

The link wasn't an exhaustive list of constants, nor intended to be.

"And that something is closely tied to the theory or mathematical model that you pick?"

Science can only posit on models, something you can't model can't be described scientifically, and science can't opine on its reality until there's a model to check.

There may be a "god constant", where the amount of omnipotence, omniscience and omnipresence is conserved or measured by. But we don't have (and cannot have, since "god" is supernatural and obeys no laws) any model of "god", so cannot pretend that there is such a constant, never mind it BEING a constant, fundamental or not.

To not stray away from core which are "fundamental constants"... Maybe my understanding is wrong.. but to me, those are the ones that you CAN'T derive from theory alone, but need to actually measure to get a value. If that's not the meaning of f.c. then sorry for the trouble :)

I guess that what I am asking is sort of a generalized question. If you have your TheoryX which is suppose to explain and model this universe... what is the minimal number of values that you have measure, which are constant through time, in order to get it working?

Why are you leaping off to "derive"?

That's orthogonal to fundamental constants.If that were the case, then the fine structure constant isn't fundamental, since you derive it from the formula.

The OP was about how the constants can't be fundamental because the fine structure constant was dimensionless, whereas these others had dimensions.

You're better off looking at the wiki page and following the citations.

" If you have your TheoryX which is suppose to explain and model this universe… what is the minimal number of values that you have measure, which are constant through time, in order to get it working? "

Well, that's what the link I provided is providing. 26,ish.

It is 26 (arguably, since this is just a proposition with evidential support) for the "theoryX" Baez describes.

But even if it is exactly 26 as proposed, that would be for the standard model, which doesn't include gravity or GR. But those are other "theoryX", so it would be wrong to claim it any different from 26, because your count is per theoretical model.

String theory is likewise trying to reduce the number of fundamental constants by virtue of unifying their explanation to "strings".

But, again, if you want something else, you should sort the citations on WP on the subject.