Saturn's Moon, Enceladus, Is Our Closest Great Hope For Life Beyond Earth (Synopsis)

When you think about life beyond Earth, you likely think of it occurring on a somewhat Earth-like planet. A rocky world, with either a past or present liquid ocean atop the surface, seems ideal. But that might not even be where life on Earth originated! Deep beneath the Earth’s surface, geologically active hydrothermal vents currently support diverse colonies of life without any energy from the Sun. Saturn’s icy moon, Enceladus, has a subsurface ocean unlike any other world we’ve yet discovered. 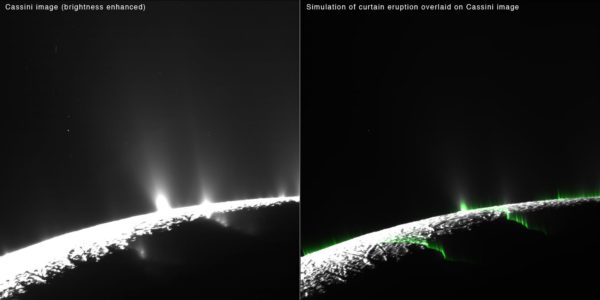 An image of an eruption on Enceladus' surface (L) shown alongside a simulation of the curtain-like eruption from Earth-based scientists (R). Image credit: NASA / Cassini-Huygens mission / Imaging Science Subsystem.

The tidal forces of Saturn itself provide the necessary heat, and also create cracks in the Enceladean surface, enabling massive geysers. This subsurface ocean rises hundreds of kilometers high, regularly resurfaces the world with a coat of fresh ice, and even creates the E-ring of Saturn. But most spectacularly, it may house actively living organisms, and could be the next-best world for life, after Earth, in the Solar System today. 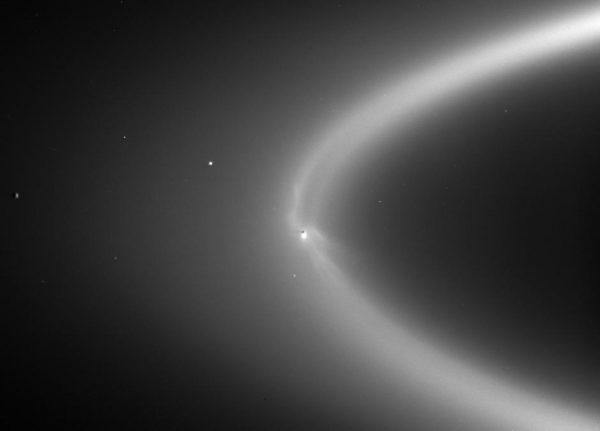 Saturn's E-Ring, as imaged here by Cassini, is created by it's frozen Moon, Enceladus, ejecting icy material over time. Enceladus is the bright spot at the image's center. Image credit: NASA/JPL/Space Science Institute.

Come get the full story on Enceladus, and welcome Starts With A Bang’s newest contributor, the remarkable Jesse Shanahan!

Hi Jesse - so on astronomical time scales, does the loss of matter to Saturn's E-ring have a noticeable effect on the moon? Or is there ever a transfer of matter back to Enceladus (or any other moons in the vicinity)? If there *were* any biologicals on Enceladus, this would be an intriguing way of spreading them within the Saturn system!

While finding life on Enceladus, or anywhere extraterrestrial, would IMHO be the best result of space exploration, I'm happy to take a wait and see approach. If the definition of life remains tentative, there's no need to rush to find it.

Daily News for October 19th 2098
*Breaking News*
- Japenese Orbital Fishing Fleet (JOFF), which recently arrived at Enceladus to begin harvesting native prawns (Penaeus Enceladus) discovers two structures beneath moons thick icy crust. JOFF's prawn-sonars specially designed to cope with enceladus ice detected what seems to be a US secret military base, some 2 kilometers under the ice. The base seems to be located just below the north polar belt of enceladus. To further their amazement, they also discovered an old USSR submarine under the south polar cap of enceladus. Both locations seem to be long abandoned.... ;D

We could really use a post on finding molecular hydrogen and methanogenesis. Just sayin'.

...not that shoelaces aren't interesting.