"Being a scientist and staring immensity and eternity in the face every day is as grand and inspiring as it gets." -Carolyn Porco

Launched back in October of 1997, Cassini will take its final plunge into the ringed world it’s been orbiting for over a decade on Friday, September 15th. Before it does, however, it’s worth a look back at the tremendous science that’s come about from the first dedicated mission to venture out to Saturn, including a series of surprises that we had no idea we’d find when we were planning and preparing this mission. 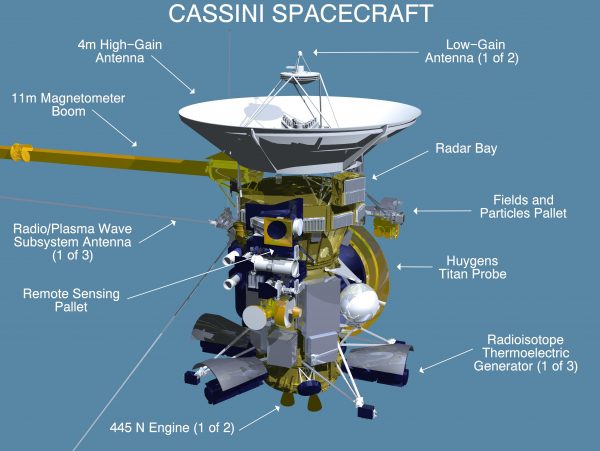 A diagram of the Cassini spacecraft, including the various instruments and on-board devices and probes, as laid out one year prior to launch. Image credit: NASA / ESA / Italian Space Agency; JPL-Caltech.

Sure, our radioisotope-powered spacecraft was equipped with a lander to investigate the giant moon Titan, and many instruments to analyze the various molecules it would find on Saturn, in its rings, and in its many moons. But the polar hexagon and the central vortex, the largest storm ever seen in the Solar System’s history, a myriad of features in the rings (and their gaps), the cause of the two-toned nature of Iapetus and much, much more all came about not because we were seeking to solve these mysteries, but because we had built a spacecraft capable of looking for more than what we were anticipating.

An image of an eruption on Enceladus’ surface (L) shown alongside a simulation of the curtain-like eruption from Earth-based scientists (R). Only through the incredible science of the Cassini mission were we able to understand what's going on with this world. Image credit: NASA / Cassini-Huygens mission / Imaging Science Subsystem.
Tags
Astronomy
Solar System
Categories
Technology

"All the atoms of our bodies will be blown into space in the disintegration of the solar system, to live on forever as mass or energy." -Carolyn Porco Launched in 1997, NASA’s Cassini spacecraft has shed unprecedented views on our Solar System’s majestic, ringed world. From the discovery of new,…

Saturn's Moon, Enceladus, Is Our Closest Great Hope For Life Beyond Earth (Synopsis)

"Aha! That satellite was scuttled on Enceladus, Saturn's main dump moon!" -Professor Farnsworth, Futurama When you think about life beyond Earth, you likely think of it occurring on a somewhat Earth-like planet. A rocky world, with either a past or present liquid ocean atop the surface, seems ideal…

The Strangest Moon In The Solar System (Synopsis)

“The dance between darkness and light will always remain — the stars and the moon will always need the darkness to be seen, the darkness will just not be worth having without the moon and the stars.” -C. JoyBell C. What do you do when you discover a moon around Saturn that's only visible during…

“My Lord, the fleet has moved out of lightspeed. Com Scan has detected an energy field protecting an area of the sixth planet of the Hoth System. The field is strong enough to deflect any bombardment.” -General Veers, Star Wars: The Empire Strikes Back Out beyond Saturn’s main rings lie a number of…

If you see these images you'd wonder why to waste any more time on Mars, Saturn is the place to be!

BTW 1997 is 20 years ago, if you look at how technology has evolved since than, the first mobile phones vs mega computers in the palm of your hand now. Looks like some great times ahead for space exploration.

when it comes to technology evolution and time it takes for probes to get to outer planets, we'll sadly always lag behind. Meaning, what was cutting edge when the probe was made, will always be retro tech by the time it arrives to the destination.

It takes years to make a probe, then months/years before it's launched, and then years for it to reach the destination. By that that time.. all that was great in terms of drawing board, is mostly obsolete tech when it's actually reached the destination

My favorite pic from Cassini from its 'Grand Finale' was this one:

Janus, the moon responsible for the ring alternates between orbiting above and orbiting below the ring in a 4 year pattern. That up and down oscillation is recorded in the structure of the ring.

that's an awesome image, denier. haven't seen that one before. and the density waves so clearly visible...just stunning.

one of my favorite, the pale blue dot theme, and no, that's not a black hole ;)

That is a great one. It almost makes the space around Saturn look foggy.

Sad to see the craft meet its inevitable end. Much appreciation for the men & women that made this mission possible.

Awesome images, and i don't use "awesome" lightly. Science at its best!