"A candidate is not going to suddenly change once they get into office. Just the opposite, in fact. Because the minute that individual takes that oath, they are under the hottest, harshest light there is. And there is no way to hide who they really are." -Michelle Obama

The most massive stars in the Universe are true behemoths, rising to hundreds of times the mass of our Sun and burning at temperatures upwards of 30,000 K at their surface. But there are stars out there that are even hotter, despite only being 10% or less as massive: Wolf-Rayet stars. The key to their cosmic success? Blowing off their outer layers of hydrogen. 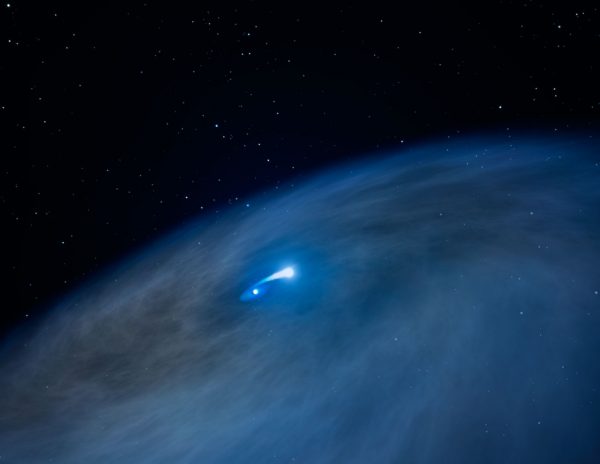 O-class stars are the hottest main-sequence stars, but by expelling their outer hydrogen layers, as this illustration shows, they can achieve even greater temperatures. The star illustrated here is the first Wolf-Rayet star to be found with a disk. Image credit: NASA, ESA, and G. Bacon (STScI); Science Credit: NASA, ESA, and J. Mauerhan.

By only leaving the dense, massive core of already-fused elements, Wolf-Rayet stars burn helium, carbon, oxygen or even heavier elements at their centers, while the journey to the surface “only” cools the star down to ~200,000 K by time the edge of the photosphere is reached. Elements like carbon, nitrogen, and oxygen may be ionized up to four times when their spectra are viewed. 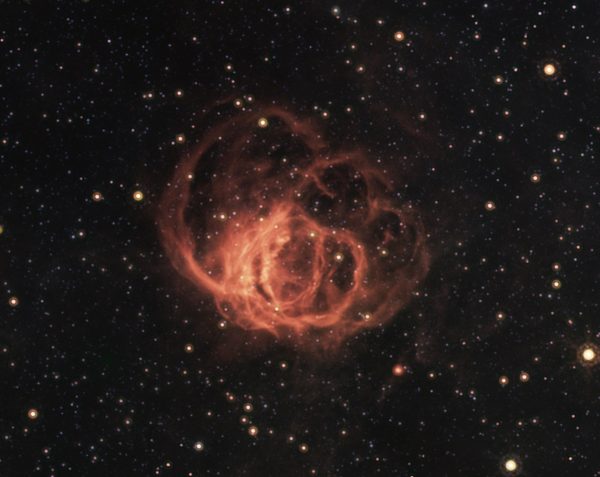 The Wolf-Rayet star WR 102 is the hottest star known, at 210,000 K. In this infrared composite from WISE and Spitzer, it's barely visible, as almost all of its energy is in shorter-wavelength light. The blown-off, ionized hydrogen, however, stands out spectacularly. Image credit: Judy Schmidt, based on data from WISE and Spitzer/MIPS1 and IRAC4.

Come learn the secret – and get the spectacular images and descriptions – of the hottest stars in the Universe for today’s Mostly Mute Monday!

These Wolf-Rayet stars would make for a pretty inhospitable Solar System!

Slightly off-topic but today's eclipse day for you folks in America I think. Best of luck to all of you trying to see it. I hope this doesn't happen to you:

@Anonymous Coward,
Much of the United States really could use the rain far more than a 'gee whiz it got dark for a few minutes' moment right now.
I can get the effect of a complete solar eclipse every time I walk under a leafy tree or enter my house. I call it 'shade'.

Hmmmph. What do you know, it actually did downpour rain through the entire peak of the eclipse. I guess the weather frogs heard me.

@CFT #4: Yay! Anti-science blowhard missed out on science for the day.

The eclipse was all that was predicted and more.

The clouds stepped aside and the Moon took a bite out of the Sun at one o'clock right on schedule at 11:49.

There was no appreciable change in the daylight until around 13:00, and then the dark came on us all of sudden. It must have scared the hell out of the Ancients to look up and see a black hole where the sun should have been.

Our small crowd broke spontaneously into applause and "WOW!"s.

The light-sensitive lights on the outside of the hall blinked on, the temperature did seem to go down a bit, and my wife saw a few firefly flashes. Then the crowd was quiet and still for several moments, until the Sun flashed out of the right side of the blackness to a second applause.

It was bright and sunny where we were, and we got great viewing of the eclipse. Though I think I actually nerded out more over the various, different cardboard pinhole cameras people had made than the eclipse itself.

CFT, everytime I read one of your comments from now on it will be in a Grampa Simpson voice, but without the humor.

Now go adjust the onion on your belt!

@rich r #8,
That's perfectly all right, because whenever I read your comments I hear Pee Wee Herman's voice, but in a slightly higher pitch with even more petulance.
.
If you actually knew your Simpsons, you would know a thing or two about Grandpa Simpson, and why he is the way he is. Unlike his well meaning but apathetic and dim witted son Homer, Grandpa Simpson was once a strong intelligent young man and war hero, a member of the greatest generation his nation has ever known. Mr. Simpson had the indecency to succumb to age and senility, which in the minds of ignorant children such as yourself, is a high crime worse than treason, as all young children think they will always stay young, cool, and handsome forever.
Sorry, but that's not how it works.

@Michael Kelsey #5,
Anti-Science blowhard? Missed out on science? For the WHOLE day? Not just a few minutes? All because mundane astronomy doesn't evoke near mystical religious awe in me?
Ouch.
I'm terribly hurt.
Next thing you know, you will be calling me a blasphemer, heretic, thought criminal, junior ROTC, republican, 'not one of us pod person', and an infidel, as you rip up my scientism card while trying to excommunicate me from your virtual particle cargo cult. Oh the pain, oh the pain.
.
If you feel you are somehow more 'scientifically enlightened' from standing in the shade of the moon for a few minutes instead of watching it rain, you are clearly just high on something you shouldn't have been smoking. Maybe you could just stick to decaf instead.