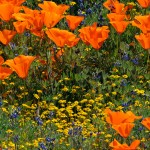 The Launch of PeerJ - PeerJ Blog

New Shade of Green: A Stark Shift for Onetime Foe of GMOs - NYTimes.com