Climate Change Impacts in the United States: A Summary of the New National Climate Assessment

I previously posted a summary of the water-related conclusions from the new National Climate Assessment, recently released after three years of writing, review, and analysis. The following “findings” are a broader summary of the results from the newly released National Climate Assessment (NCA). They are by no means a full summary: far more detail can be found in the chapters and the regional syntheses, but these are noteworthy conclusions. (Note, thanks to Tim Smith – Sustainable Water Resources Coordinator – for highlighting these. The page numbers refer to the NCA Summary)

1. Global climate is changing and this is apparent across the United States in a wide range of observations. The global warming of the past 50 years is primarily due to human activities, predominantly the burning of fossil fuels.

Many independent lines of evidence confirm that human activities are affecting climate in unprecedented ways. U.S. average temperature has increased by 1.3°F to 1.9°F since record keeping began in 1895; most of this increase has occurred since about 1970. The most recent decade was the warmest on record. Because human-induced warming is superimposed on a naturally varying climate, rising temperatures are not evenly distributed across the country or over time. See page 18. (And see the Figure below.) 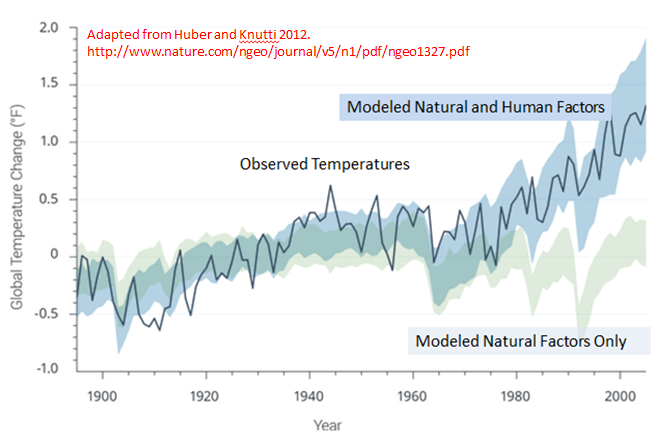 Figure 2.3 from the NCA: Observed global average temperature changes (black line), model simulations using only changes in natural factors (solar and volcanic) in light gray/blue, and model simulations with the addition of human-induced emissions (darker blue). Climate changes since 1950 cannot be explained by natural factors or variability, and can only be explained by human factors. (Figure source: adapted from Huber and Knutti, 2012).

2. Some extreme weather and climate events have increased in recent decades, and new and stronger evidence confirms that some of these increases are related to human activities.

Changes in extreme weather events are the primary way that most people experience climate change. Human-induced climate change has already increased the number and strength of some of these extreme events. Over the last 50 years, much of the United States has seen an increase in prolonged periods of excessively high temperatures, more heavy downpours, and in some regions, more severe droughts. See page 24.

3. Human-induced climate change is projected to continue, and it will accelerate significantly if global emissions of heat-trapping gases continue to increase.

4. Impacts related to climate change are already evident in many sectors and are expected to become increasingly disruptive across the nation throughout this century and beyond.

Climate change is already affecting societies and the natural world. Climate change interacts with other environmental and societal factors in ways that can either moderate or intensify these impacts. The types and magnitudes of impacts vary across the nation and through time. Children, the elderly, the sick, and the poor are especially vulnerable. There is mounting evidence that harm to the nation will increase substantially in the future unless global emissions of heat-trapping gases are greatly reduced. See page 32.

5. Climate change threatens human health and well-being in many ways, including through more extreme weather events and wildfire, decreased air quality, and diseases transmitted by insects, food, and water.

Climate change is increasing the risks of heat stress, respiratory stress from poor air quality, and the spread of waterborne diseases. Extreme weather events often lead to fatalities and a variety of health impacts on vulnerable populations, including impacts on mental health, such as anxiety and post-traumatic stress disorder. Large-scale changes in the environment due to climate change and extreme weather events are increasing the risk of the emergence or reemergence of health threats that are currently uncommon in the United States, such as dengue fever. See page 34.

6. Infrastructure is being damaged by sea level rise, heavy downpours, and extreme heat; damages are projected to increase with continued climate change.

Sea level rise, storm surge, and heavy downpours, in combination with the pattern of continued development in coastal areas, are increasing damage to U.S. infrastructure including roads, buildings, and industrial facilities, and are also increasing risks to ports and coastal military installations. Flooding along rivers, lakes, and in cities following heavy downpours, prolonged rains, and rapid melting of snowpack is exceeding the limits of flood protection infrastructure designed for historical conditions. Extreme heat is damaging transportation infrastructure such as roads, rail lines, and airport runways. See page 38.

7. Water quality and water supply reliability are jeopardized by climate change in a variety of ways that affect ecosystems and livelihoods.

Surface and groundwater supplies in some regions are already stressed by increasing demand for water as well as declining runoff and groundwater recharge. In some regions, particularly the southern part of the country and the Caribbean and Pacific Islands, climate change is increasing the likelihood of water shortages and competition for water among its many uses. Water quality is diminishing in many areas, particularly due to increasing sediment and contaminant concentrations after heavy downpours. See page 42

8. Climate disruptions to agriculture have been increasing and are projected to become more severe over this century.

Some areas are already experiencing climate-related disruptions, particularly due to extreme weather events. While some U.S. regions and some types of agricultural production will be relatively resilient to climate change over the next 25 years or so, others will increasingly suffer from stresses due to extreme heat, drought, disease, and heavy downpours. From mid-century on, climate change is projected to have more negative impacts on crops and livestock across the country – a trennd that could diminish the security of our food supply. See page 46.

Chronic stresses such as extreme poverty are being exacerbated by climate change impacts such as reduced access to traditional foods, decreased water quality, and increasing exposure to health and safety hazards. In parts of Alaska, Louisiana, the Pacific Islands, and other coastal locations, climate change impacts (through erosion and inundation) are so severe that some communities are already relocating from historical homelands to which their traditions and cultural identities are tied. Particularly in Alaska, the rapid pace of temperature rise, ice and snow melt, and permafrost thaw are significantly affecting critical infrastructure and traditional livelihoods. See page 48.

10. Ecosystems and the benefits they provide to society are being affected by climate change. The capacity of ecosystems to buffer the impacts of extreme events like fires, floods, and severe storms is being overwhelmed.

Climate change impacts on biodiversity are already being observed in alteration of the timing of critical biological events such as spring bud burst and substantial range shifts of many species. In the longer term, there is an increased risk of species extinction. These changes have social, cultural, and economic effects. Events such as droughts, floods, wildfires, and pest outbreaks associated with climate change (for example, bark beetles in the West) are already disrupting ecosystems. These changes limit the capacity of ecosystems, such as forests, barrier beaches, and wetlands, to continue to play important roles in reducing the impacts of these extreme events on infrastructure, human communities, and other valued resources. See page 50.

More acidic waters inhibit the formation of shells, skeletons, and coral reefs. Warmer waters harm coral reefs and alter the distribution, abundance, and productivity of many marine species. The rising temperature and changing chemistry of ocean water combine with other stresses, such as overfishing and coastal and marine pollution, to alter marine-based food production and harm fishing communities. See page 58.

12. Planning for adaptation (to address and prepare for impacts) and mitigation (to reduce future climate change, for example by cutting emissions) is becoming more widespread, but current implementation efforts are insufficient to avoid increasingly negative social, environmental, and economic consequences.

Full Reference to the NCA

Thanks for the summary. As a High School teacher this is very valuable and usable. I went to a talk you gave years ago (maybe 6?) at the University of Minnesota. It was a great talk so thanks for that too!