"You never need think you can turn over any old falsehoods without a terrible squirming of the horrid little population that dwells under it." -Oliver Wendell Holmes

As an astrophysicist, I get sent all sorts of (unsolicited) novel ideas and theories claiming to overturn everything from special relativity to quantum theory to the Big Bang. But the biologists get one very special type that I don't, that I was fortunate enough to have shared with me. This is not a case of physicists vs. biologists; on the contrary -- as the Be Good Tanyas might tell you -- this is what it sounds like

When Doves Cry.
Because biologists get emails like this:

I have been researching bigfoot in Washington and have 3 hours of video and castings of 2 different foot prints in the snow. I now have a chunk of hair I found on a broken tree branch. I need to find out what kind of animal it came from. It is about 3 inches long and like dry fishing line and there is some hair that is like a under coat or winter coat. You my think I'm crazy but that's ok because I know what I have and some day the world will know too.

Now, the only evidence for bigfoot I've ever seen comes courtesy of Graham Roumieu:

But someday, the world will know too, and perhaps that day is today. Because today, I present to you the 2009 paper, Predicting the distribution of Sasquatch in western North America, from the Journal of Biogeography.

The science of ecological niche modelling basically allows you to take the combined data of observed sightings/collected evidence of the presence of an animal species along with environmental data such as rainfall, temperature, foliage density, etc., and create a computer model of where that species lives and in what density.

So why not apply that to bigfoot/sasquatch in the pacific northwest? 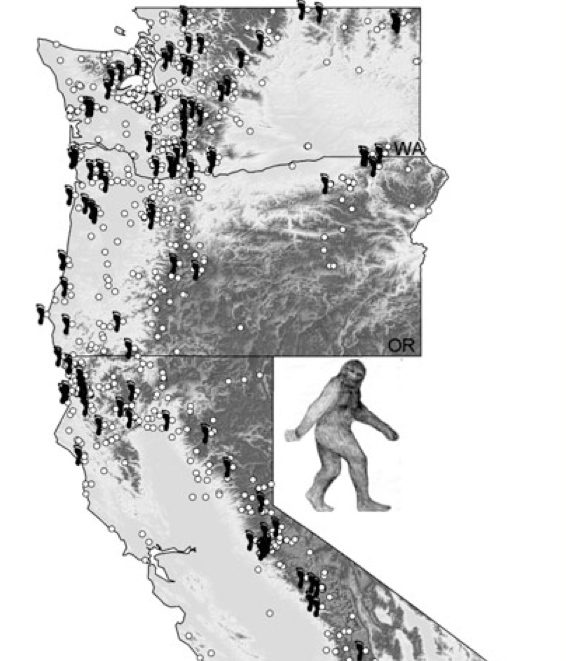 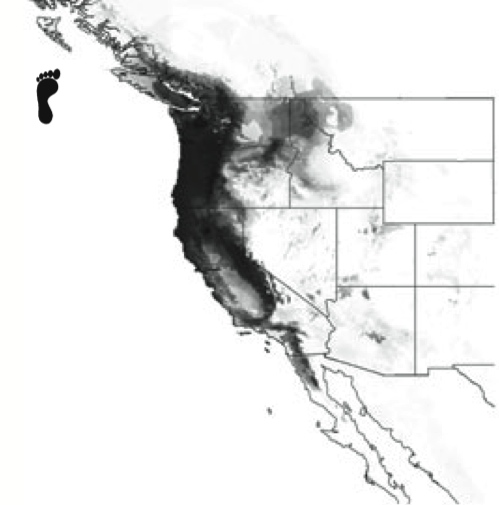 Of course, one could look at the ecological niche models of other large creatures whose existence isn't disputed. Based on the same type of data -- encounters with humans as well as footprint evidence -- spread across Oregon, Washington and California, they also constructed an ecological niche model for bears. 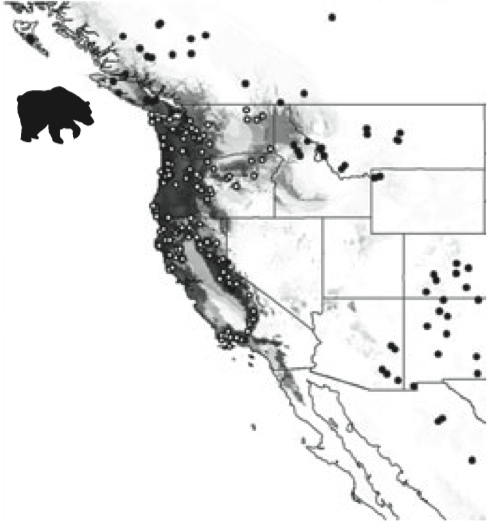 Well, that's (un)surprisingly similar, wouldn't you say? In fact, the authors have done the correlative analysis, and here are the findings. 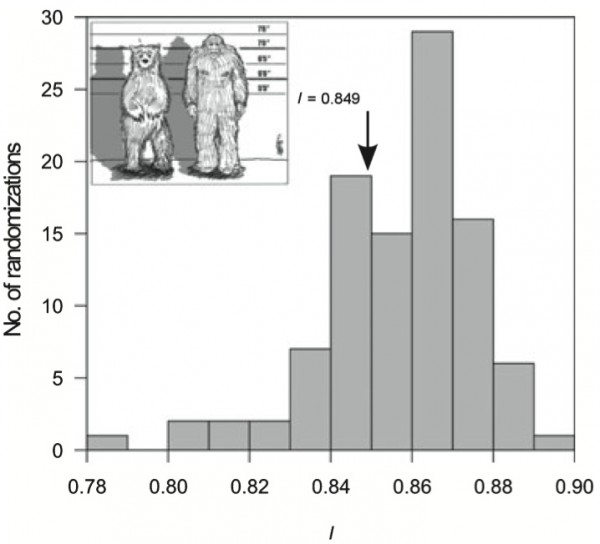 What does this mean? How good is this overlap?

The observed value of I = 0.849 indeed indicates a high degree of overlap, and falls well within the null distribution generated from maxent runs for 100 randomizations of Bigfoot and black bear coordinates (Fig. 3; P < observed = 0.32). Thus, the two 'species' do not demonstrate significant niche differentiation with respect to the selected bioclimatic variables. Although it is possible that Sasquatch and U. americanus share such remarkably similar bioclimatic requirements, we nonetheless suspect that many Bigfoot sightings are, in fact, of black bears.

Or, as even Bigfoot believers will tell you, you have to know the difference between a bear and Bigfoot so that you don't mistake one for the other. 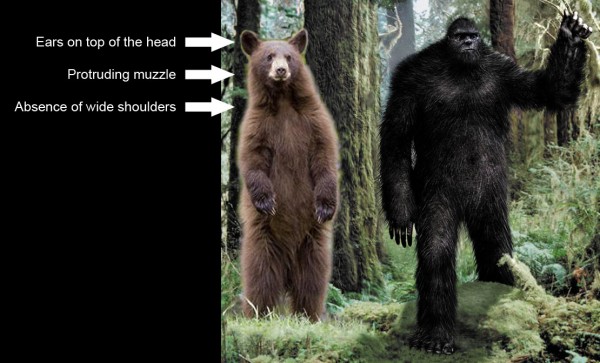 Here's another clue: there's absolutely no evidence that Bigfoot knows how to dance. Bears, on the other hand...

Ethan, this might be helpful to your biologist friend, or for the fans, there is a documentary The Legend of Bigfoot about the creature, available at YouTube's SciFi movie section: http://www.youtube.com/movie/legend-of-bigfoot

There's also a bigfoot sighting on Mars. The rover Spirit sat still and took a large panoramic color shot. I use the Mars bigfoot for my avatar on twitter. The thing is, the Martian bigfoot is under an inch tall. Spirit has binocular vision, so you can triangulate distance to the target. The size can then be determined from the characteristics of the camera optics. Since Spirit took color pictures by using red, green, and blue filters, the Martian bigfoot had to maintain a walking pose very still for over an hour, otherwise the colors would be blurred. It's obviously a bit of rock when viewed in context. What's less obvious is what the real geometry must be. It's hard to get the bigfoot image out of your head.

No, no, no: What the niche overlap really suggests is that we should be checking bear scat for Bigfoot remains.

You have to think these things all the way through.

I really hope that footprint indicated near Coos Bay, Oregon, isn't the one found in the woods in 1976. A friend of mine created that with a foot he made in woodshop class.
The local newspaper sent a bunch of reporters out into the forest to camp and look for the creature before my friend's classmates spoke up.

The truth is BEAR-RIDING BIGFOOT!

If you can not tell the difference between a bear and a gorilla, you have something wrong with your brain. Most people who are shown pictures of the two animals can tell what they saw. No one picks a bear if they saw something that looks like an ape. The features of the two are not the same. The two do live in the same area,because they eat the same things. But somebody with half a brain can tell the difference.

Please enlighten us on your insights into the diet of a creature an example of which has never been discovered or studied nor proven to have ever existed??

Or perhaps my whole brain has missed something?

Greg, I think that you are unaware of just how easy it is to mistake one animal for another. As an example, in a monograph on the Santa Ana Mountains cougar population, there was a subsection entitled "Most cougar sightings are bogus and do not need to be validated." Of the numerous instances described in the section, the researchers mentioned an event where several members of the national guard who were stationed at a tower had called the scientists in to verify a cougar sighting. The researchers arrived, went onto the ledge that the guardsmen were standing on, took out their binoculars, and saw a coyote standing in the middle of a coverless field.

If national guardsman can't distinguish a coyote standing out in the open from a mountain lion when using binoculars, do you really expect that people will distinguish bigfoot from a bear in a heavily wooded environment, especially if their expectations of seeing bigfoot are heightened?

Here's a particularly sharp example of how easy it is to mistake one animal for another: How many humans are (fatally) mistaken for deer by their fellow deer hunters?

"But somebody with half a brain can tell the difference."

And someone with a complete brain can tell that bigfoot sightings are almost definitely bear sightings.

Shane, actually it has existed, it was called a Gigantopithecus it stood up to 9.8 feet tall, it lived from as roughly as 9 million years ago to as recently as 100,000 years ago. I don't know if I believe in bigfoot or not but I think that this creature could simply be an evolved Gigantopithecus. So yes, it definately DID exist, in China, India, and Vietnam. It could have easily migrated to America over several thousand years, so yes, it most definately has been proven to have existed. Several animals are being discovered all around the world to this very day, so who knows, maybe bigfoot is out there, perhaps an endangered species in hiding. We'll soon see one day, maybe.

What's the crime of "being bigfoot"?

every thing is wrong with being bigfoot wow.

How do you prove something is NOT real, Jack? You cannot prove a negative.