stoat | January 14, 2014
"Our hero" in this case being Monckton at WUWT. Most of the post is a long rant about The Weekly Standard's Lindzen puff piece exemplifies the conservative media's climate failures by Dana Nuccitelli in the Graun, which is in turn a reply to What Catastrophe? MIT’s Richard Lindzen, the unalarmed climate scientist in "the weekly Standard" (wot I wrote about recently). And of course I didn't read it all. But I was struck by M's reply to DN's The major difference between Lindzen and Galileo was that Galileo was right. Which was: Actually, Galileo was wrong. The Church, as well as informed…

stoat | December 29, 2013
The Graun is a bit rubbish at typesetting and maths, which is most aptly illustrated by one of their jokes: At a party for functions, ex is at the bar looking despondent. The barman says: "Why don't you go and integrate?" To which ex replies: "It would not make any difference." Geddit?

stoat | May 20, 2013
After this, it seems to me that the human race has realised its ultimate potential; no further progress is possible. We might as well all go back to bed. Some things I see, I think: yes, you're doing that very well. But I understand what you're doing, and I could, if not do it myself - I could understand how to train to get there. Like running a marathon in not-much-more-than-2-hours. I'm never going to do that, and even if I trained I couldn't, but I can roughly understand what's going on. With this, I can't even imagine my brain and hands working well enough to get anywhere close to this.

stoat | March 29, 2013
More from buzzfeed. While I'm here, Sham journals scam authors is pretty good from JA. But really: a journal with no website? Do they still write with ink quills?

stoat | March 19, 2013
Eli offers us a new wheelchair but I think its a man slumped to the ground after smashing his head against the wall, leaving a trail of blood dribbling down. Refs * The two epochs of Marcott by Jos Hagelaars. * WUWT is still fulminating (I throw that in as a token gesture of non-tribality, but you know my heart isn't in it). * Global Temperature Change — the Big Picture

How To Tell The Birds From The Flowers: A Manual of Flornithology for Beginners

stoat | March 3, 2013
From the bizarre discoveries file: The Plover and the Clover can be told apart with ease, By paying close attention to the habits of the Bees, For en-to-molo-gists aver, the Bee can be in Clover, While ety-molo-gists concur, there is no B in Plover. and this is by Robert Wood, who did early work on the Theory of the Greenhouse.

stoat | March 17, 2012
A man with a stoat though his head? No! Darth Vader in a kilt on a unicycle playing the bagpipes:

stoat | February 22, 2012
A bit of fun for once: if you have a few mins spare, try a game at peepo.com. And if you have a bit more time, try the 19x19. [Update: breaking news: Neutrinos not FTL for embarrassing reason?

stoat | July 17, 2011
About a year ago I enthused about my new watch, a Garmin Forerunner 110. Since then it has become ever-more-vital, sustaining me through any number of runs. However about a month ago it started to mist up inside. I took the back off and it dried out, but then I had two wet outings, it misted up, I didn't get round to drying it out, and it has never been the same again. In fact it no longer works. Score -1 for Garmin. During the year I'd got rather annoyed by a couple of other flaws with it: it really won't act as a GPS-on-the-move, in particular it won't tell you its height; and the whole… 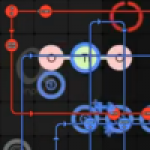 sciencepunk | June 10, 2011
It's been a while since we had some Friday Flash Fun here at SciencePunk, but this one really blew me out of the water. SpaceChem is currently causing quite a stir amongst the gaming websites: Escapist Magazine gave it the Genre Buster award and Rock Paper Shotgun hailed it as "one of the year's best indie games". Deservedly so, in my opinion. SpaceChem puts you in the shoes of a junior materials chemist, blasted into the depths of space to work for a pan-galactic mining corporation. Your job is to build complex molecules from the basic chemicals mined out of these planets. At your…

stoat | June 5, 2011
Following the success of Where are we now? from Jules-n-James, I present you with a slightly harder one: [*] I am, of course, not there now. Nor was I there when I wrote this. But I was there when I took the photo. Refs * Poppies

cagapakis | April 25, 2011
Two videos that Patrick Boyle and I made were selected for the Bio:Fiction Film Festival! One of the prizes is an online audience award, and you can watch and rate all of the films! It's such an honor to be part of this festival and to be showing our work next to that of so many amazing artists, scientists, and filmmakers, and we would be super thrilled if you voted for us! Here are our videos! First, the world premiere of Compound 74, a fictional documentary about a possible future of synthetic drug design through synthetic biology: And second, the commercial we made for Ginkgo BioWorks--… 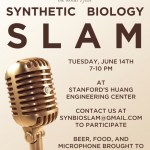 cagapakis | April 16, 2011
Before you get your tickets for SB 5.0 make sure that you'll be in town for the world's first Synthetic Biology Slam!

cagapakis | April 6, 2011
Valerie Weiss is not just a film director with a fun new movie coming out, she's also a scientist. After getting her PhD from Harvard (from the same lab as me!) she created PhD Productions, and her newest film is a quirky romantic comedy look at the life of a neurotic graduate student. "Losing Control" "blurs the lines between science and love," as our grad student hero tries to decide whether her boyfriend in "the one" through a series of controlled experiments. Here's the trailer: There's going to be a screening of the movie this Friday at Harvard, free with Harvard student ID. Maybe I'll…

stoat | March 18, 2011
It is all explained here "in a calm rational scientific manner". Refs * Japan nuclear threat: The tsunami is the bigger tragedy By David Spiegelhalter, Professor of the Public Understanding of Risk, Cambridge University * Pakistan miners feared dead - for anyone who thought that coal was safe. * Why Fukushima made me stop worrying and love nuclear power - George Monbiot * Jurrassic Park is a triumph for dino theme parks: Build more dinosaur theme parks now! * JEB on some back-of-the-envelope calculations of radiation risk 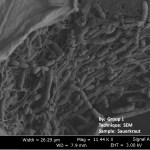 cagapakis | February 4, 2011
The Harvard Microbial Sciences Initiative Graduate Consortium hosted a fun workshop during the January term where students learned about microscopy by taking some amazing pictures of food microbes. The images taken with the scanning electron microscope of sauerkraut, kombucha, and some stinky cheeses show beautiful and complex landscapes made by and of microbes. Sauerkraut is fermented by cute rod-shaped lactic acid bacteria: Kombucha, a tea fermented by a combination of yeasts and bacteria, looks incredible under the microscope, where you can see the dense mesh of cellulose fibers that the…

cagapakis | February 1, 2011
Scientists aren't known for their fashion sense, but they do have their own unique charm, as you can see in this episode of In The Lab, with Bill Cunningham.
Advertisment