The history of science can be read as a series of brusque reality checks. Once, we thought the sun revolved around the Earth, but modern astronomy relegated our real estate, incrementally, from the center of everything to a hum-drum corner of an unimportant galaxy in a handful of generations. The theory of Evolution turned us from mini-gods into just a consequence of squicky biological randomness. The decipherment of the structure of DNA and the human genome turned the spark of life into something that can be written down, stored, and analyzed by computers. Again and again, we have found our sense of centrality challenged. But at least we still had our most sacred space: the mind.

Alas, it couldn't last forever. In his genuinely beautiful book, Incognito: The Secret Lives of the Brain (which just came out on paperback) neuroscientist David Eagleman proposes a parallel trajectory for neuroscience, booting the mind from its pedestal to remind us, yet again, of the folly of human self-importance.

Eagleman presents the idea, based on the most current science, that the phenomenon of consciousness is one of the brain's lesser functions. The conscious mind calls the whole machinery "I," but we only become aware of thoughts, behaviors, and actions significantly after the bulk of our brains have already done the heavy lifting. Incognito abounds with examples of brain functions that happen without our knowledge, from the simple kinetics of attraction to strange phenomena like "blindsight," in which some blind people can correctly guess what they're looking at (beyond what random chance would predict) because a low-level operator part of their brain is still chugging along undeterred. Most of what we do, from tying our shoelaces to producing speech to playing video games, is done by hidden subroutines without much conscious awareness. 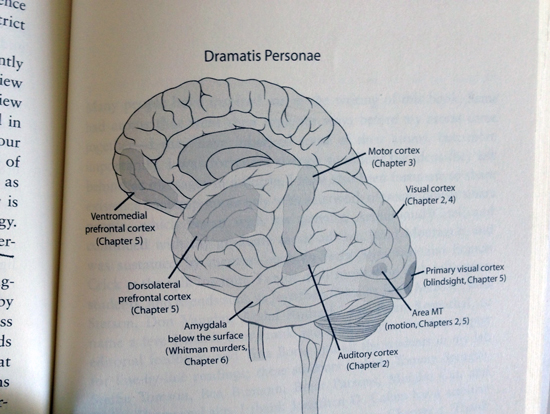 Consciousness, Eagleman suggests, is just a system for meting out the lower programs–a kind of superintendent for the automated systems whirring below the hood. It's only when we need to learn something new, or our cognitive routine is interrupted, that the superintendent lumbers out from its office to give matters a look-over. In terms of total neural function, it's a pretty small-fries gig.

This view of mind shatters the ego, much like a heliocentric Earth shattered Renaissance cosmology. To some, it might seem almost sinister. Like a squirrel eviscerating a pile of nuts, Incognito methodically cracks every natural preconception its readers might hold about their selves, until it feels like there's nothing left but empty shells. What is spiritual fervor? Perhaps just a temporal lobe seizure. What is sexual desire? Just a complex subconscious perception of smell and symmetry. What is aggression, emotion, sadness, a temperament? Glitches in the wet lab. We are the sum total of our chemicals–neurotransmitters, hormones, viruses, and genes–at any given moment.

Catalyzed by these chemicals, countless hidden programs drive our actions, and our brain (the left hemisphere, actually) makes justifications later; free will is a story we tell ourselves, often in retrospect. The entire subjective world is tied to biological machinery, with little room for a ghost in the machine. At present, neuroscientists have not found any spot in the brain that is not driven by other parts of the network. That is to say, there is no independent, or "free," part of the brain–a detail that slays the most sacred cows of the human experience. "If  there's something like a soul," Eagleman writes, "it is at minimum tangled irreversibly with the microscopic details."

I'm left with this sense of a hulking, somnolent beast that churns far below the waterline of my me. Or, too, a mess of rival processes, endlessly redundant, working simultaneously to address the myriad problems of existence, without much concern for any meta-narrative I might pour on top of them. But here I am writing this review now, seemingly of my own volition, so what's happening?

Eagleman isn't just an explainer; he's a real writer with palpable awe for human mysteries (his solitary fiction work, Sum: Forty Tales from the Afterlives, is a book of great sentimental value to me). It's this poetic sensibility, as well as Eagleman's ability to contextualize what he calls the "dethronement" of consciousness, that makes Incognito transcendent rather than nihilistic. After all, biological reductionism is as ooky and threatening to the closely-held, ineffable stuff of humanness as quantum mechanics is to our sense of physical reality. But for Eagleman, the brain is a new cosmos. Just as living on the edge of outer space gives us a front-row seat to the drama of the void, so too does being the bearer of all this indifferent biological machinery. The seat of consciousness may be no better than a folding chair, but what a show.

This is a great review of an excellent book. I especially enjoyed how Eagleman integrated current events, such as Mel Gibson's DUI, to his subsequent explanations. At the time many people weighed in on whether Gibson's comments were racist or it was the alcohol or his
addiction speaking and is there a difference. Eagleman dives into this enigma.

I really enjoyed this review. I am getting both books thanks to holiday amazon money! Considering the connectivity of the brain, i wonder what path a thought takes through your brain reviewing a book like this. Also i respect your willpower to not address the author's last name, i hope his hair stays abundant throughout his life.

well I'm going to read bc its on your blog!